Brigadier Arthur Penrice Sayer died at Netley in March 1962 and is buried in ?

George Herbert Shooter died in Netley on 23rd April 1916 and is buried in Tibshelf churchyard.

Gilbert Edward Smith died at Netley on 27th August 1916. He is buried in St. Mary Churchyard, Overton. From an Ancestry tree. 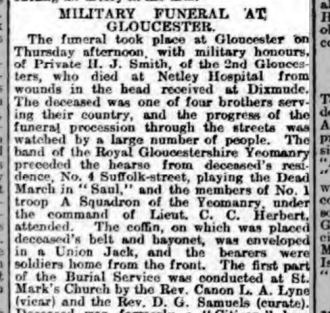 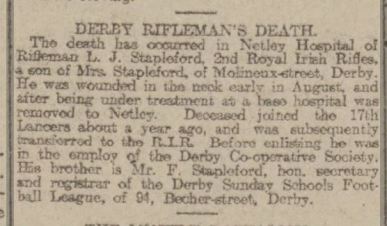 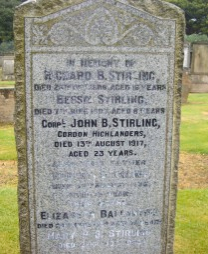 John Ballantyne Stirling died at Netley on 18th August 1917 and is buried in Polmont churchyard Stirlingshire. 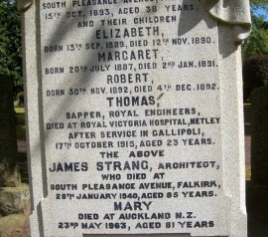 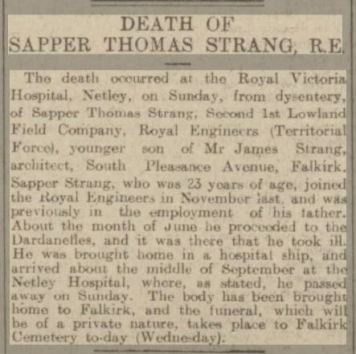 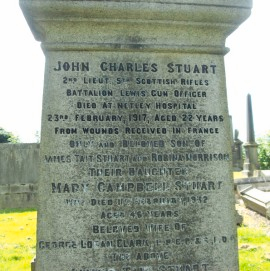 Major James Fearnley Stuart died at Netley on 5th May 1907.

Frederick Charles Sutton died at Netley on 8th September 1918 and is buried in Melton Suffolk.

Arthur/Albert Tarr died at Netley on 13th May 1915 and is buried in Exeter Cemetery.

Walter John Tebby was injured in July 1916 and died at Netley Hospital on 23 July 1916. He is buried in St Eadburgha's Church, Broadway and commemorated on the war memorial in Broadway.

Allan Thomas writes: I have a Great Uncle who died in the RVH on 22nd Nov 1919. He was Sapper Belmont Thomas service no 333130 and died of meningitis and convulsions. He was treated by Maj. TA Stephens RAMC, the Chief Resident Officer. Sapper Thomas is buried in Anfield cemetery Liverpool. 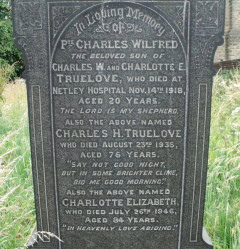 Lt. Charles Rushton Turner  fell from his horse and is buried in Christchurch Cemetery. 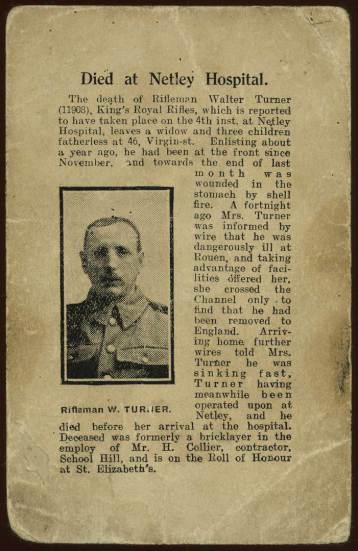 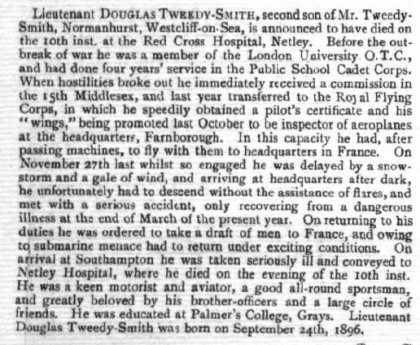 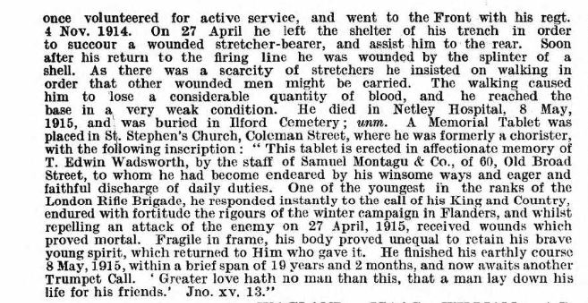 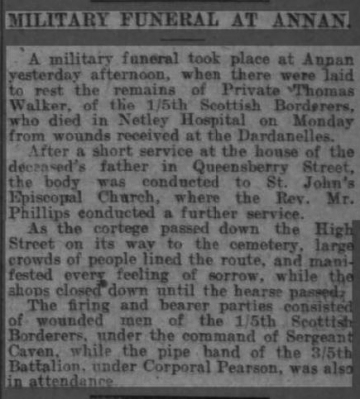 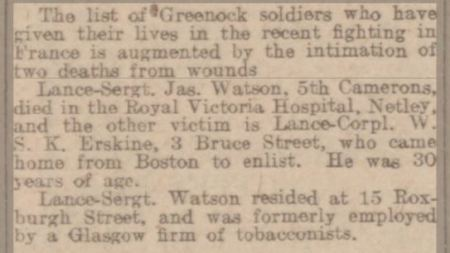 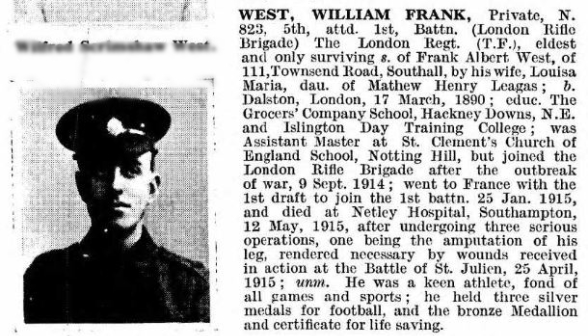 Pte. Charles Ronald Whitaker died in the Welsh Hospital at Netley of pneumonia on 14th February 1919. He was based in the Remount Depot at Swaythling. He is buried  in Nottingham Church Cemetery. (Nottingham County Council Roll of Honour)

Corporal Wilson Wiles died at Netley on July 5th 1900 and is buried in Redcar cemetery. 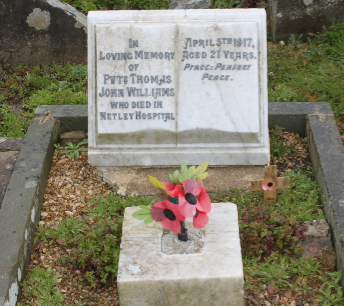 21561 Private Thomas John Williams.Died April 5th 1917. Grave is in Bethesda'r Fro churchyard Near Boverton South Wales. Thanks to Hugh Trainer for this photo. 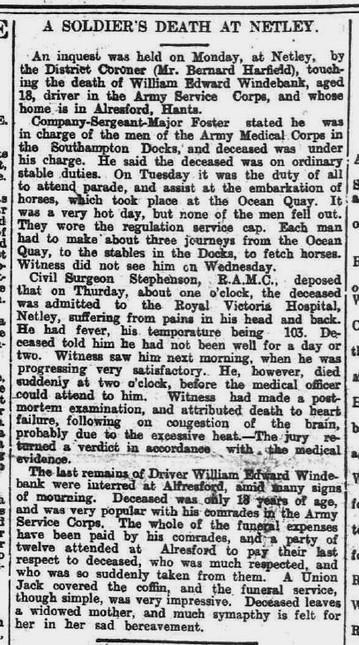 News has been received by Mrs Milligan, 62 Rosefield Road, Troqueer, Dumfries, that her son, Pte. William Wilson, 5th K. 0.5.8., died on Tuesday 18th June 1940 at Netley Hospital as the result of a wound in the thorax from an anti-tank bullet. The wound was received during period of intense fighting when Pte. Wilson and his comrades were assisting in covering the evacuation of the British troops. He himself was tank driver, and although only nineteen years of age last month was well known for his daring. Prior to the outbreak of war he had served six months with the 4th K.O.S. 8., and when hostilities began he was called and transferred to the 5th K. 0.5.8. He was a young man of a likeable disposition and was well known in Dumfries. His first job leaving school was at the chocolate stall at the Lyceum Theatre. Thereafter he was with Air John Campbell, builders’ merchant, Buccleuch Street, and, before joining up, with the Motor Salvage Coy., King Street, Maxwelltown. The funeral will take place to-day at 2.30 from Rosefield Road to St Andrew’s Cemetery. 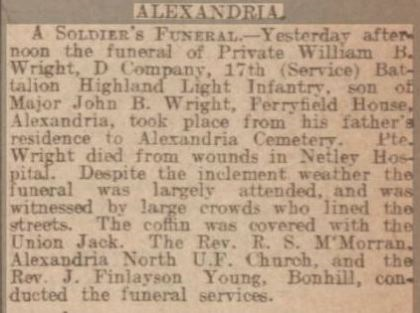 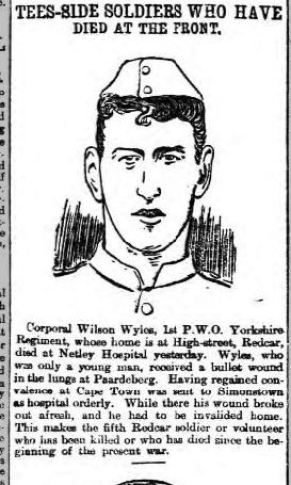 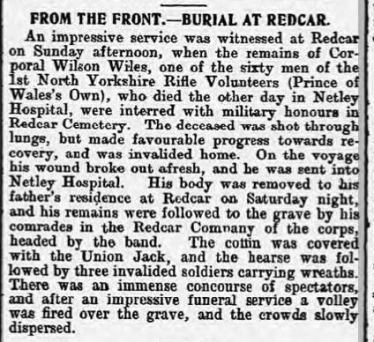