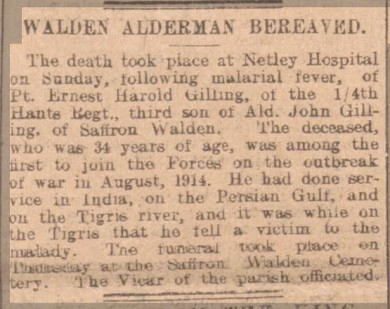 Pte. Charles Henry Glaire died at Netley on 10th October 1914 and is buried in Ventnor cemetery Isle of Wight. 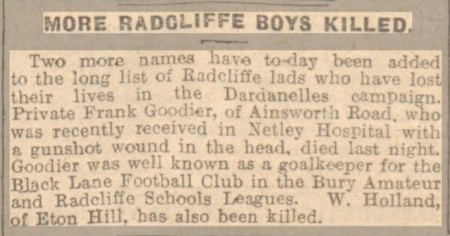 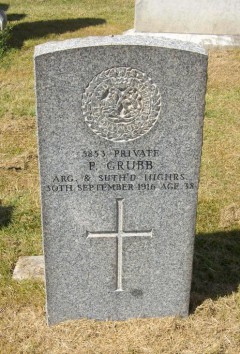 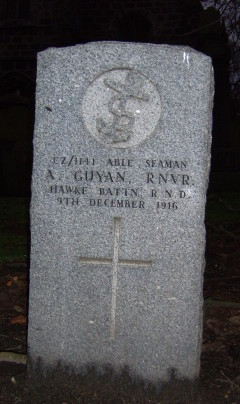 from Russell Harris on ancestry - buried in Scotland 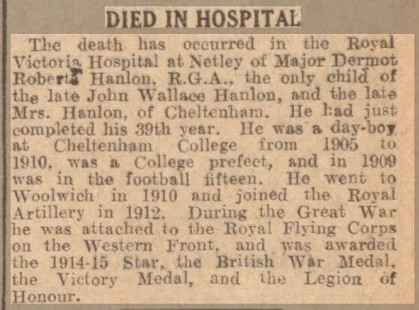 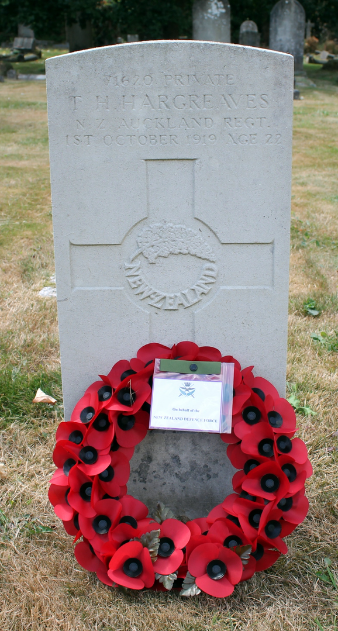 Captain David Henry Harman died at Red Cross hospital of illness on 2nd May 1916 and is buried in Kensal Green Cemetery. 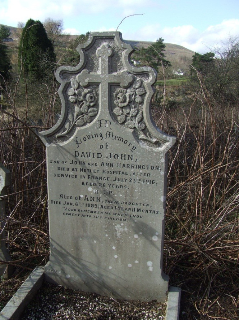 Arthur Hebblethwaite died on October 29th 1914. Husband of Ada, he is buried in Norton. 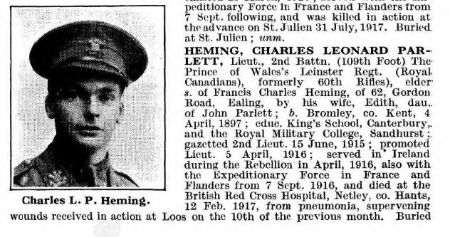 Pte T A HICKSON, 2nd Cheshires whose home is at 46 Rhyd Terrace, Tredegar, died at Netley Hospital on or about 12/03/1915 from wounds received at the front.  His body was brought to his home and he will be interred with military honours on Saturday.

Two young soldiers of 594 Coy. R.A.S.C., Cheltenham, were fatally injured when an ambulance overturned in a collision with an 8 h.p. motor-car at Woolston, Southampton, on Sunday afternoon. The dead men are Driver Roy Desmond HOBLYN (20), and L/Cpl. Alfred John COOK (24). In the ambulance with them and suffering from injuries were the driver Sgt. Robert Martin, also of 594 Coy., R.A.S.C., Pte. Samuel Porter, R.A.M.C., stationed at Gloucester, and a military patient, a member of the Royal Welch Fusiliers, who was being taken to the Royal Military Hospital, Netley. Driver Hoblyn and L/Cpl. Cook both died within a few hours of admission to the hospital. The other three military personnel were taken to Netlev Hospital after treatment. The driver of the private car, Mr. C. Pitches (43), of Church Road, Woolston, was able to proceed to his home after treatment for bruises and shock. Hoblyn's home is at Cumberland Road. Oxford, and Cook comes from Weare Street, Bath Bridge, Bristol. 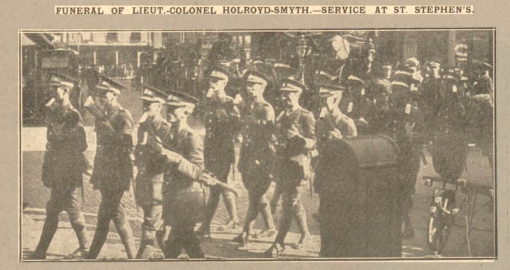 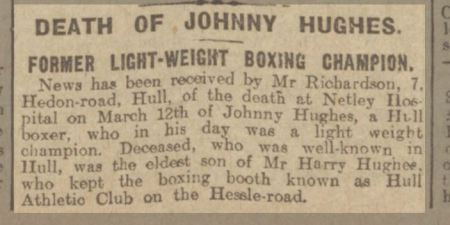 Pte Richard Hughes, 13th Battalion West Regiment, of Pontygwaith was laid to rest at Trealaw Cemetery, Tonypandy, Mid Glamorgan, having been conveyed from the RVH, Netley about 31/12/1918.

1632 Pte. Thomas Jefferson died 11th October 1901 and was buried in Netley cemetery, then later removed and reburied possibly in Durham. Thanks to Kathy Gilman.

Sapper Selby Jelbart 150633 from the Inland Water Transport Royal Engineers died at Netley on 22nd November 1917 age 21. He was the son of John Treweeke Jelbart and Phylis Jelbart. He is the only war grave in the Crows-An-Wra cemetry in St. Buryan Cornwall.

My thanks to Penny Worledge for this information.

Pte. Richard Fisher Johnson died at Netley on 30th September 1916 and is buried in All Saints Churchyard Barwick in Elmet Leeds. 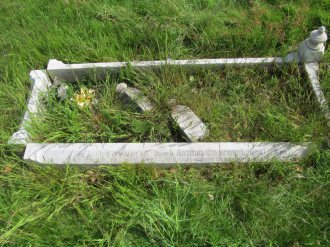 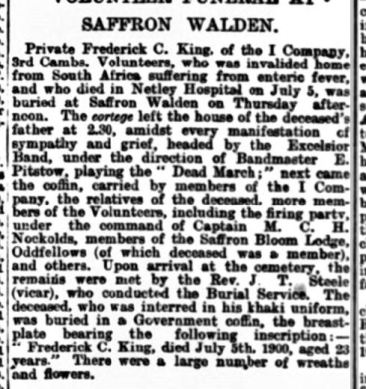 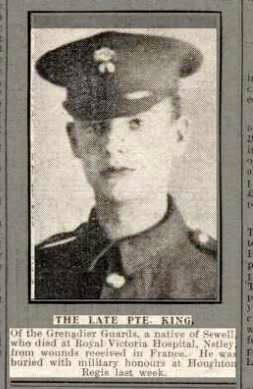 Joseph Sidney King died at Netley on 8th October 1915 and is buried in Cheltenham cemetery. 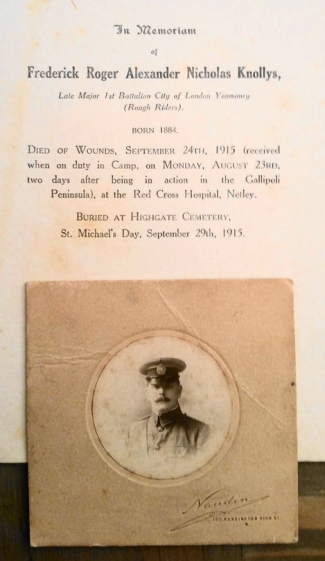 Alan Ladd died at Netley on the 14th October 1918 and is buried in Long Sutton. 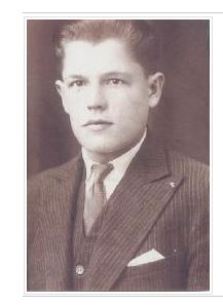 Rudolf Lanz served his apprenticeship as locksmith-car mechanic. For exile via Poland. He served with No 311 Sqn as Flight Mechanic E. Due to Rudolph`s fleeding was his sister sent to Germany to work there for the Third Reich and his brother was tortured in the Brno Kounic Dorm Facility. Rudolf Lanz died at the Victoria Netley Hospital on Oct 29, 1943. Courtesy of his niece Rose Fisher. He is buried in Brookwood Cemetery.

Cpl. Robert Kenneth Lewis died 26th May 1915 and is buried in Panteg cemetery. 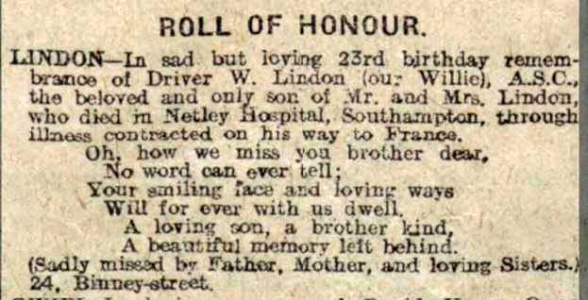 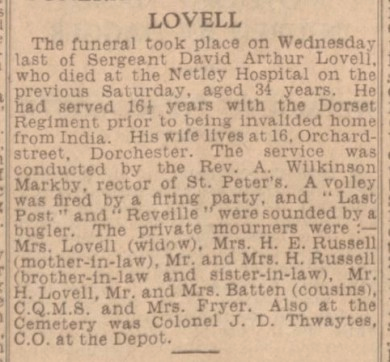 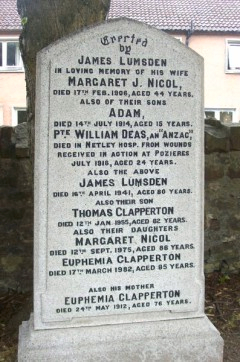 Pte. William Deas Lumsden died 30th July 1916 at Netley and is buried in Linlithgow Cemetery Scotland. Here is a photograph of his headstone kindly taken by Colin Seivwright