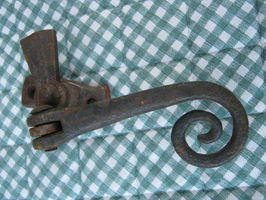 Yesterday, 11th of august 2014, I happened to notice a listing on ebay for a window latch that was associated with Netley hospital. I asked the owner if I could add it here and this was his very nice reply:

Hello, I'd be delighted, if the handle and story appeared on any website! I can tell you that the monkey tail window catch came from D block, when the building was being refurbished/part demolished for Hants Police circa 1986/87. The window frame, came my grandmother's way, from a friend, whose son/family member thought these windows too good to be burnt! So for many a year, the pair of windows, acted as a coldframe cover! The window frames rotted, but I salvaged the handle! So here we have a little piece of Netley Hospital history. It's been stashed away for years, so i thought someone could find it useful!

My own father, now dead, was a patient as Netley's infamous D block in around early 1965. Not, from his recalling, a pleasant experience, but he recovered and later 'joked' about the electric shock treatment and the padded cells!

My Mum and I once visited the Hants Police Centre, just to see where my father was 'held' for 6 months. A place, I wouldn't return to, but never the less a fascinating and beautiful building. Just a shame the main hospital didn't survive!!! That was a 'monster'.

Every good wish for your website! Netley is certain a place that shouldn't be forgotten!

Thank you for this story.