DEATH OF A WARWICK VETERAN SOLDIER WHO FOUGHT IN MANY CAMPAIGNS

Warwick has lost one of its oldest soldiers, Arthur Thomas ANDREWS, who died at 42. Chapel Street, Friday, after only three days' illness. He was 69 years of age. Mr Andrews was born at sea on March 2nd, 1873, and lived at Redhill, Surrey, until 17 years of age, when he ran away to join the Army. He enlisted in the West Riding Regiment, and six months later was sent on foreign service. Whilst abroad he asked to be transferred to the Royal Warwickshire Regiment and went with Lord Kitchener’s army to Khartoum. That campaign over, he returned to England, and shortly afterwards the South African war broke out.

Mr Andrews married Jane Istead at St. John’s Church, Redhill, and then went to South Africa, where he participated in the fighting, and marched with Lord Roberts to Pretoria. His ability to speak Arabic—he knew four languages—led him into unexpected adventure in the Sudan. He went alone with Lord Kitchener - both dressed as Arabs - on an intelligence mission, and after their return the enemy was attacked. In this engagement he was wounded in the right side by Arab with a poisoned spear. One of his comrades sprang forward and saved his life by sucking the poison out the wound. He was invalided to Netley Hospital. Southampton, and while there, Queen Victoria visited the sick and wounded and honored him by pinning a special medal on his breast.

When hostilities broke out in 1914, Mr. Andrews joined the Royal Engineers, and served all through the war. He worked for the Warwick Corporation for years, and served in the Fire Brigade for 25 years. During his Army career, he was presented with six medals - the Khartoum medal, the Sudan medal, the South African medal 1901) which consists of five bars (Belfast. Diamond Hill. Johannesburg. Orange Free State and Cape Hill). In the Great War he won the 1014-15 Star, the 1914-18 G.V. medal and the 1914-18 medal. His last medal was for long service in the Fire Brigade.

Private Charles BYRNE was awarded a silver Victoria Cross whilst he was in Netley convalescing in 1855 after fighting in an attack on the Redan. 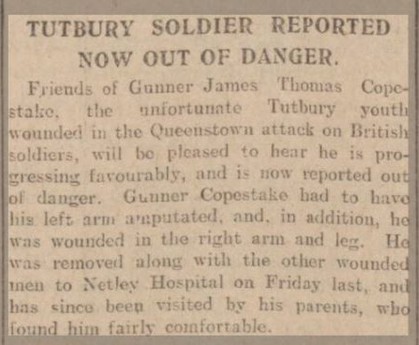 Philip Henry CURTIS was injured in January 1900 and taken to the hospital in Ladysmith. He arrives at Netley on June 20th suffering from 2 wounds from Mauser bullets. After a few medical reports, he is discharged in November 1900 and awarded a pension for life of 1 shilling a day. His brother William George was at Netley in WWI (see Passing Through - In WWI tab)

From the Curtis family tree on Ancestry. 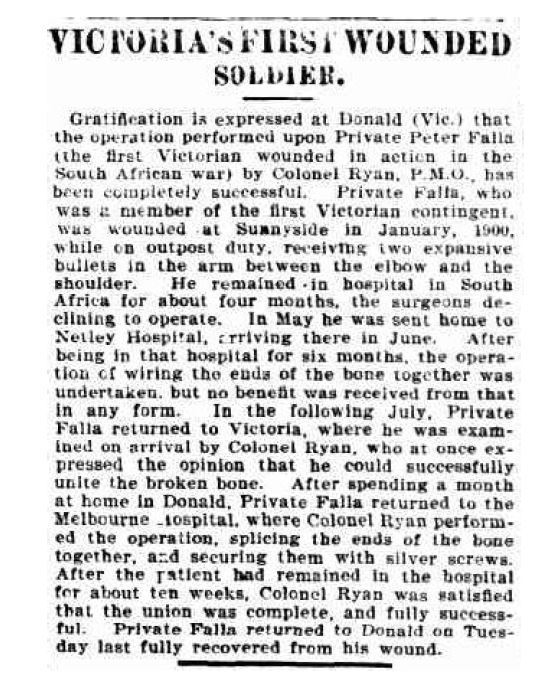 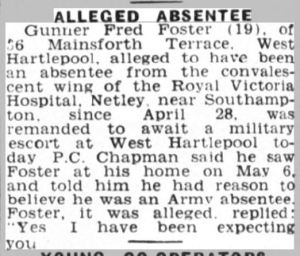 Hi there. My great great grandfather was Charles Walter Gray, born in Maidstone in 1873. He was in the 7th Queen's Own Hussars. On the 16th of July 1897 he was wounded in Mashonaland which is in modern day Zimbabwe. He had to have his leg amputated after receiving the wound from an enemy spear. He recovered at Netley Military Hospital. The photo of him here is at Netley, he is on the left with the crutches. Thanks. Russell 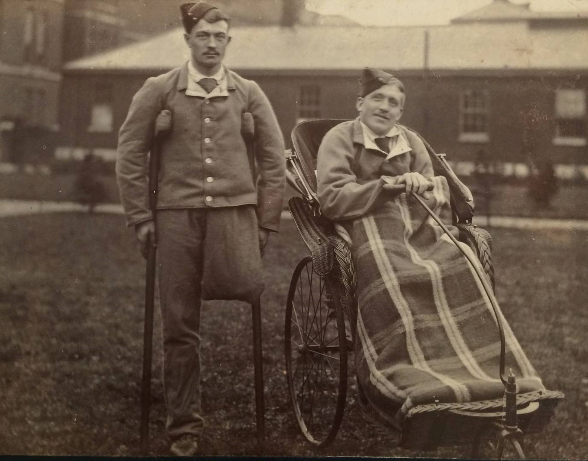 A few months ago Barry Haskey sent me his father Henry's story of how he became a patient at Netley.

In WWII, Henry was posted to the south west tip of Hayling Island, home of the Sinah (Sina) Heavy Anti-aircraft Battery and the 219 Battery of the 57th Wessex heavy anti-aircraft unit. On the night of the 17th April 1941 his life changed forever.

The Sinah Battery was armed with four 4.5 inch naval guns. Each one was mounted in the centre gun positions.They were protecting two airfields: Tangmere in Sussex, which had Spitfires and Hurricanes and the base of the Flying Fortresses near Reading.

It was 8pm and the sun had just set and the Luftwaffe were on their way to the South Coast. Henry was operating the sights of one of the guns. They would take it in turns to sit inside a thin metal box mounted to its side, turning dials to position the gun before each shell was fired.

After some time at the sights, it was Henry's turn to swap with a member of his crew. He climbed out of the gun and went to make some tea and get some more shells from the Ammo store about 30 metres away. Henry heard a bomb falling from the sky. The order came for everyone to lie down. Those who weren't scared stiff threw themselves to the ground. Henry popped his head out and caught the blast.

The explosion completely destroyed Henry's gun and killed all of his crew.Henry was instantly blinded in both eyes as shrapnel entered his body he also had a compound fracture to his left arm. Covered in blood and oil, he was taken to the Royal Victoria hospital at Netley.

Henry's wife Rose visited him there. He was still blinded and his arm was weighted and hanging at the side of the bed to straighten it.

Over the coming days, his eyesight improved slightly, he remembered seeing a flash of red cross of the nurse's uniform.

He later worked as a goods porter on the railways but his eyesight deteriorated again in later life and he was supported by St. Dunstan's now known as the Blind Veterans UK.

Henry died on the 18th April 1986 aged 75. Too soon. For me and my family, he was a war hero. A very modest one who when asked if he was angry that he had lost his sight he simply said "How can I be, I was the only one of my crew who survived."

Thank you Barry for sharing your story. 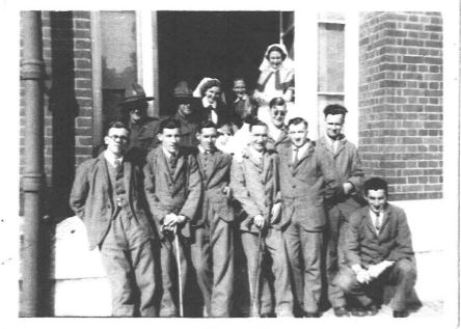 Henry is standing in front of the nurse

Derby's Only Repatriated Officer /CAPTAIN GILBERT FRANK HODGKINSON, third son of Mr. and Mrs. A. E. Hodgkinson, of Parkfields, Kedleston-road, Derby, is the only Derby officer among the repatriated prisoners of war. He arrived home on Saturday after spending two days each at Netley, near Southampton, and at Oxford since landing at Leith. At the time he was wounded in June, 1940, Capt. Hodgkinson was serving with the 5th Battalion the Sherwood Foresters, attached to the Highland Division. 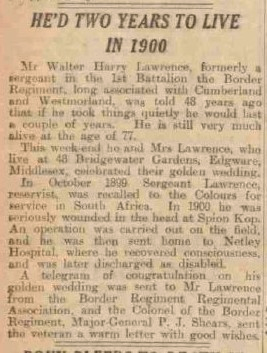 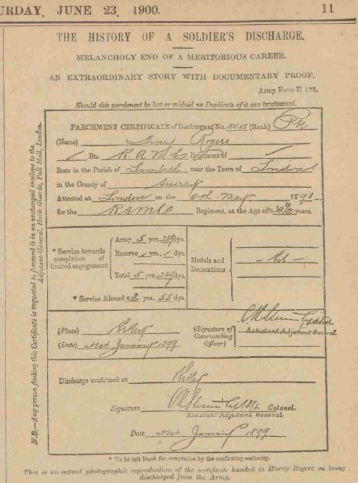 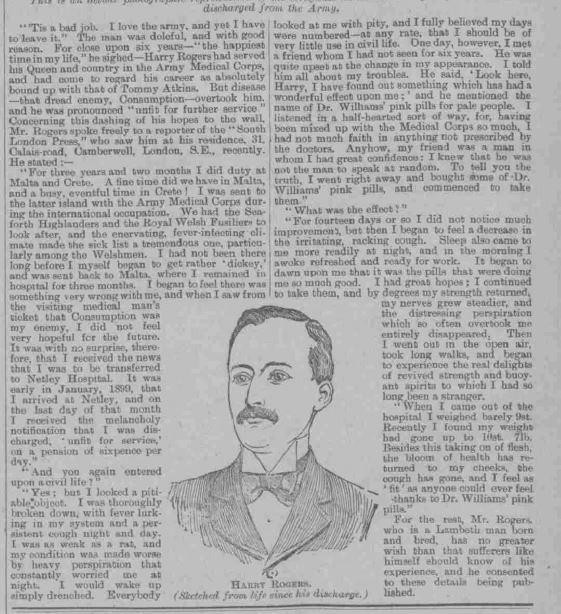 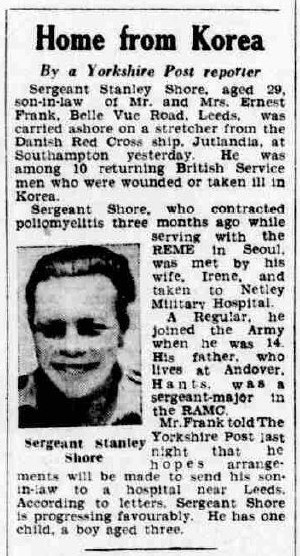 Several of the neighbours carried flags, and when Corporal Sutcliffe stepped to the platform at Shipley station and embraced his relatives he was accorded a hearty homecoming.  On arrival at home Corporal Sutliffe was accorded another hearty reception. Corporal Sutcliffe who is 26 years of age, is attached to the Royal Army Service Corps. interviewed our represents.live. Corporal Sutcliffe said that he was glad, to be home again. After being taken prisoner he was marched through France and Belglum. He was admitted into hospital in Germany suffering from polyneuritis in 1940. . He said that whilst in hospital those who were able had plenty of recreation, indulging in various games. Corporal Sutcliffe paid tribute to the good work done by the Red Cross from whom he frequently received a parcel, and added that had it not been for those parcels they would have come badly off in regard to food.

There was also a good library provided by the Red Cross and several of the men also sat for various examinations through the Geneva scheme. When at Leith on his way home Corporal Sutcliffe said that several people clamoured for souvenirs, and as had nothing else, he wrote his name and address on a piece of paper and put in his petrol lighter and threw it amongst the crowd. A lady picked it up and communicated with his relatives that he was on his way to Netley Hospital. . Before enlisting Corporal Sutcliffe was employed by Mr. G. H. Haley, wholesale clothier, 23, Cheapslde. Bradford. Travelling with Corporal Sutcliffe was Private Thomas Hall, of 6. Leyburn Grove. Shipley, who had been serving in the Pioneer Corps who was likewise accorded.

P.C. TINKLING, formerly village constable at Denham. who, at the beginning of the war, left to join his regiment, is an inmate of Netley Hospital suffering from six wounds, including a badly damaged thigh.

Enoch WADLEY was born in 1861 in Herefordshire. At the age of 17 he enlisted in the 2nd Gloucestershire Regiment and was sent to India. During the next nine years, he saw a lot of fighting and in January1887, he was taken to hospital in India and declared insane by the army surgeon K.M. O'Callighan. In March he was sent to Netley with a certificate saying that he was of an unsound mind and he had been eccentric for months. Dr Welsh of Netley hospital said he could not return to the service because he had been  "affected with insanity", so he was discharged and sent home on the 7th June 1887.

On the 15th June 1887 he killed Elizabeth Hannah Evans after meeting her from her work in the barleyfields, and after a trial, was found guilty and sentenced to death.

From Anthony Cope on Ancestry. 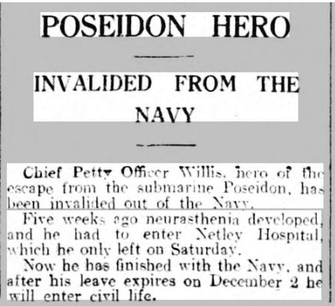 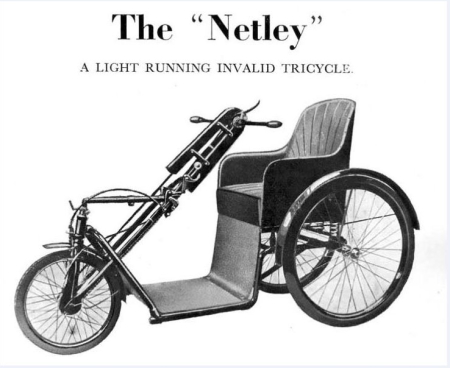