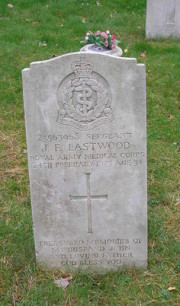 John was playing rugby when he sadly collapsed and died. 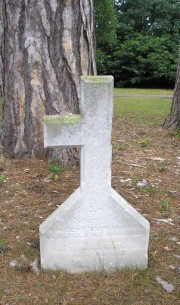 Burial no 738 Church of England

F. EDWARDS Pte. 5th Dragoon Guards died 21st May 1900. No headstone. Burial no. 1174 Church of England. Pte Edwards is the subject of a study which was titled "A New Acid Fast Streptothrix, Pathogenic To Man And Animals" by Major C. Birt and Major W.B. Leishman. Pte. Edwards contracted a fever in the garrison of Ladysmith which was complicated with dysentery. The report details his post mortem. 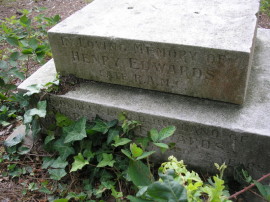 The Dearly Loved Husband Of 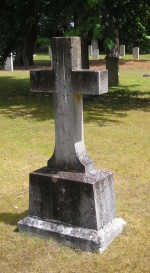 Who died at Netley 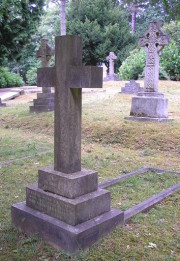 Elisabeth nee STANDISH married Charles Holt Ensell in 1862 in Bray County Wicklow, Ireland. At the time of her death she was a widow, living at Netley with her son Revd Charles Standish Ensell who was clerk to the
hospital chaplain. 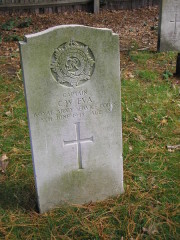 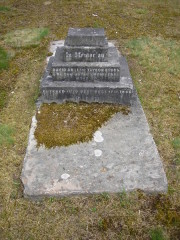 Of the Royal Engineers

David’s parents may have been David Evans from Camarthen and
Helen Eliza from Jamaica. 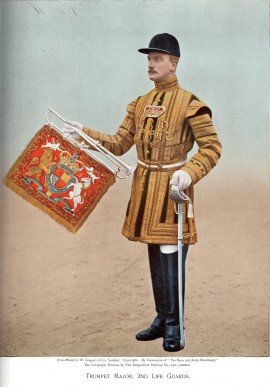 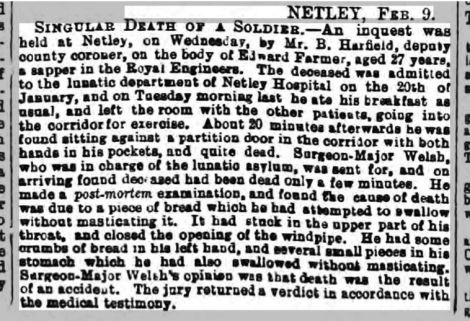 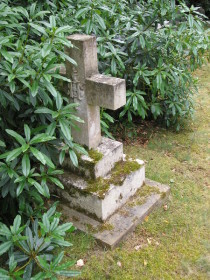 Who Entered Into Rest

On the back of the headstone is written:

William was married to Ellenor Louisa and lived at Bedford House in Polygon Rd Southampton. In the 1891 census, William age 66, wife Eleanor age 52, children, Beatrice 26, Ella 24, George 18, Rose 16, Violet 15 and Harold 12 all lived in Bedford House with 3 servants. He was a retired Major General.

William Roberts Farmer, lieut. in her Majesty's 50th Queen's Own regiment, was present at the action at Budawal, 21 Jan. 1846, under Sir Harry Smith, and
subsequently at the battle of Alliwal, 28 Jan., where he was severely wounded by a grape-shot in the thigh whilst carrying the colours of his regiment. He has received a medal for his services.

Burke Irish Landed Gentry - 1912 edition
Major General in the Army, late Assistant-Commandant Royal Victoria Hospital,Netley.
Served in the 50th regiment., and was severely wounded at the battle of Aliwal,
served throughout the Indian Mutiny of 1857/8 in the 82nd regiment. 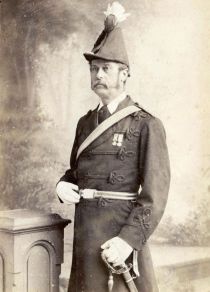 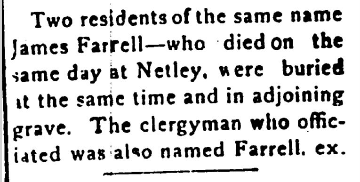 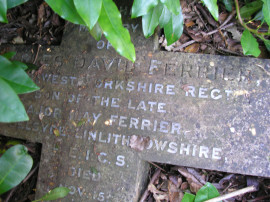 Burial no. 938 Church of England due to Cirrhosis of the liver

The 1881 census taken on Sunday April 3rd has Charles onboard “Jumna” He is listed as a Captain 2/4th Regt. born in Malacca East Indies, age 30 and married.

Possible parents for Charles are Ilay born in 1811 in Scotland and Catherine Maria De Wind. He may have had 8 siblings according to a family tree on Ancestry.

Anna Maria SMART may have been the wife of Charles. They had 5 children according to Martin Ferrier: 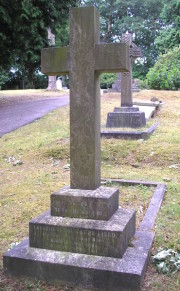 In the 1911 census taken on 2nd April, Cyril was
at Netley, A Captain age 30, single and born in Folkestone Kent. 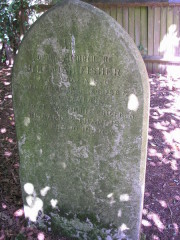 In Loving Memory of Jeremiah FISHER

Also of Two of His Children

Who Died in Infancy

I had a message from Mark Foot to see if I had any information about one of his ancestors Frederick George Foot. Luckily, I found some details about him online .

No. 4716 Frederick George FOOT was born in Cerne Abbas in Dorset. In 1903 aged 18 years, he was living in Ringwood Hampshire with a William Foot and was a baker.

He was 5 feet 4 inches tall and weighed 117 lbs, with blue eyes, brown hair and a scar on his right eye brow. He was Church of England and had his medical at Winchester. His father was George Foot of Upton Wood, Cerne Abbas in Dorset.

He signed his Attestation paper for the Militia or Reserve Division on the 28th September 1903 to serve in the 3rd Battalion Dorset Regiment.

On the 30th September 1903, Frederick signed his Short Service Attestation paper and his number was changed to 6945. He was at Dorchester from the 1st October 1903 and then went to Portland on the 7th January 1904.

On 23rd February 1905 he was examined for service and was pronounced fit. On the 28th February he went to India on the S.S. Syria? On the 21st March 1905 he was admitted into hospital with syphilis. He was given medication and was “apparently much improved” by August.

He was in hospital for 5 days in November 1906, from the 7th to the 12th not sure what was wrong but medical notes say “parasite found” so maybe stomach related? On the 21st of November 1906 he was admitted into hospital with dysentery and hepatitis and then transferred from India by ship on the 7th December 1906. He arrived at Netley and died on the 13th December 1906 at 8.15pm.

A later message from Mark reads:

What can I say as you have been so incredibly helpful. For your background Frederick George Foot was one of thirteen children of George Foot and Mary Ann nee Thorne. George ten had 2 children with Annie nee Flicker and non with third wife Sarah Newton.

From the first marriage there were 6 sons. Alfred was at the Chelsea barracks.Harry born 2/5/1885. No details but photo, Frederick George with all the info you supplied and Frank 1889 -1945. I understand he was in the navy and was at the battle of Jutland. He apparently was a deserter but later went to New Zealand and joined the services there so lots to try and discover.
Very, very many thanks for all your wonderful help.

Mark sent me a photo of Frederick's brother's Frank and Alfred and Harry but doesn't have one of Frederick.

Frederick doesn't have a headstone. Burial no. 1444 Church of England 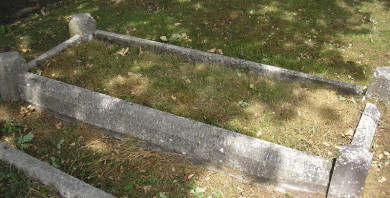 From Wife and Daughter Hazel

As A Mark Of Esteem

And in Remembrance Of

“Thy Will Be Done”

1881 census has Edward aged 15 living with his parentsThomas and Bertha and 2 brothers in Devon. Thomas is a Chemist employing 2 boys.

Corporal Edward Blane Fouraker age 24 is in the incoming passenger list from Barbados to Southampton on February 14th 1901. Ship’s name is “Para”.

There is a Corporal Edward B. Fouraker in the 1901 census at
Aldershot Military Barracks in the RAMC aged 23 and born in Exeter Devon. 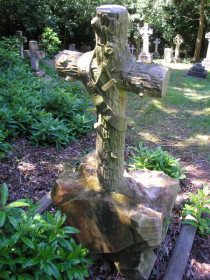 In Loving Memory of Our Dear Mother Charlotte Elisabeth FOWLES

In the 1891 census, Charlotte 40 is a widow living on an army widows pension. She is living at no. 5 Victoria Rd (next door but one to Violet ADAMS who is also buried at Netley) with daughters Nelly 19, Agnes 15, Alice 8 and sons George 10 and John 5. Charlotte was born in Ireland.

Alfred was in the Damants Horse Regiment. He died due to an accident in Southampton on August 30th. 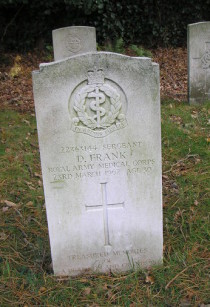 Treasured Memories Of
A Dear Son and Grandson

Donald was in an accident on Northam Bridge Southampton. He was living in Co. Durham at time of his death. 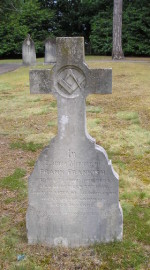 Shortly After His Return From

Erected By His
Sorrowing Widow

In the 1881 census, there is a Sgt. Frank Frankish age 29, a soldier, married at Cowley Military Barracks. He was born in Attercliffe Yorkshire. 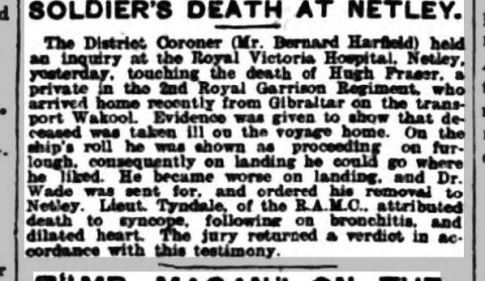 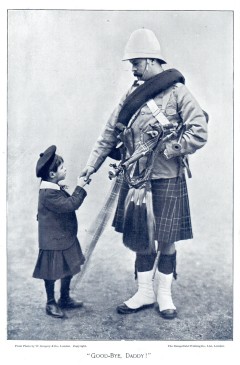