Christmas Time at the Welsh Hospital 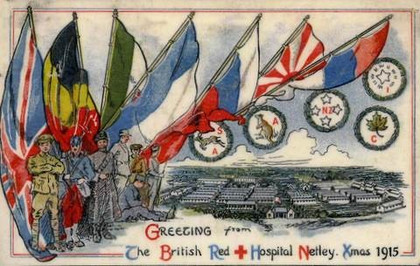 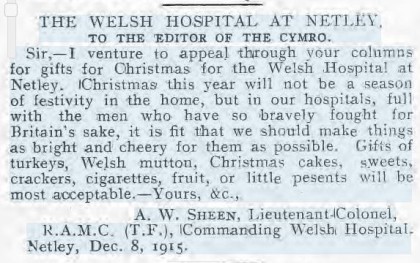 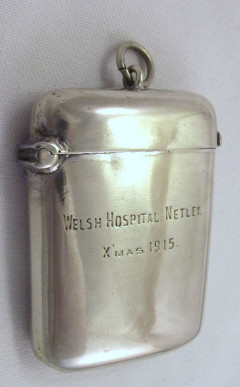 Christmas at the Welsh Hospital Netley from the Cambrian News

Christmas Day passed off very happily. The Hospital was nearly full, eighty three patients having been admitted from the trenches in France on the previous day, and the men were happy in finding themselves in such pleasant surroundings. The wards were beautifully decorated by the patients in each and rivalry existed amongst them as to have the most varied and elaborate decorations. The inscriptions were numerous and included many references to local happenings. In one ward “Cymru am Byth” had pride of place. Another had a beautifully illuminated scroll with “Welcome” to greet visitors. In a third, the ward wag had cast a somewhat unjust aspersion on those responsible for the catering by inscribing on the wall “We Want More Beer.” Every patient hung up his stocking on Christmas Eve in the hope that they would not be empty in the morning. The hope was not belied, for in the morning, all were bountifully filled. Who was responsible for the filling is not known but suspicion attaches to the sisters and ward orderlies. The contents of the stockings included a matchbox inscribed “Welsh Hospital 1915,” a gift from Sir William James Thomas, whose continued generosity to the Welsh Hospital has invested him with the love and respect that one usually attaches to a fairy godmother. There was also a card from the same source conveying Christmas Greetings and a wish for a speedy recovery. Chocolate from Messrs Cadbury was also found, as well as crackers and socks from a kind friend in New York. The whole thing was finished off with apples and oranges.

Divine service was held in one of the wards at nine o clock for the benefit of those patients who were not able to move very far.

The Christmas dinner was of course, the event of the day. The turkeys were carved in the wards by the medical officers. Through the kindness of Lady Mond of Melchet Court, plum puddings were provided for the patients and staff.

During the afternoon, there were carols and parties of singers who visited the various wards. Much amusement was caused by an orderly who dressed up, with considerable success, as a sister and a discreet young lady visitor known as “Miss Pike” who graciously visited all the wards and other parts of the hospital, turned out to be a youthful patient, admirably disguised.

The hospital staff had also a pleasant day. The singing of carols and Welsh songs on Christmas Eve was carried out by the Hospital Glee Party, who visited Netley village and won golden opinions by their seasonable performance.

Sir William James Thomas’s present to the male staff consisted of smokes and the female staff had chocolates.

One of the patients said of his Christmas dinner that it was the best meal he had eaten since he had been mobilised. Australians and New Zealanders and other overseas brothers gratefully appreciated the bountiful kindliness of the Cymru and voted the day a great success.

A merry and enjoyable time was spent at the Welsh Hospital Netley at Christmas, and those responsible for the festivities are to be congratulated on the success of their efforts. The Commanding Officer (Lieut. Col. H.G. Cook R.A.M.C.) assisted by his wife, and the Matron (Miss E. G. Evans, Aberystwyth), with staff, were indefatigable. Thanks to the liberality and excellent catering of the Commissariat Department, a plentiful supply of turkeys, plum puddings, etc., was provided for all the patients as well as the nursing and domestic staffs. The decorations which were undertaken by the patients and staff, were excellent and deserved great praise. On Christmas Eve, carols were sung by the staff. An interesting episode took place on Christmas morning when the Commanding Officer, on behalf of Sir W. J. Thomas and the people of Wales, presented each patient with a cigarette case and match box, gifts which were much appreciated. Concerts were given on the wards on Christmas Day and during the week. One interesting and enjoyable function was a tea and concert given to the patients by the sick officers.

On New Year’s Day a concert was given by the V.A.D. members of the staff, which ws excellent and greatly enjoyed. Praise is due to the orderlies who took part in the entertainments. 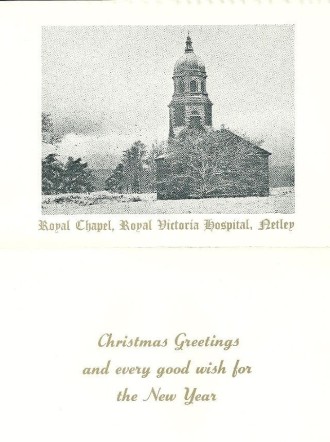 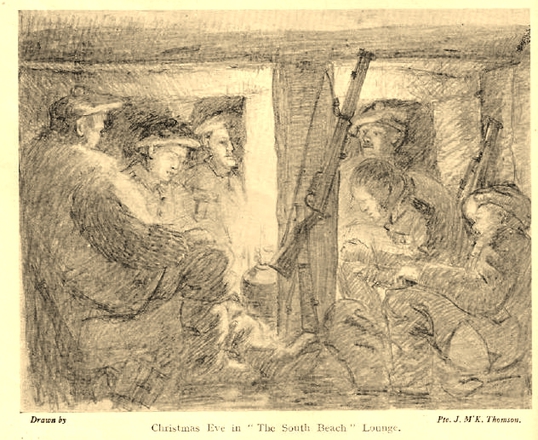 Christmas Eve in the "South Beach Lounge" the Outpost February 1916