"Passing stranger call not this a place of dreary gloom, I love to

linger near this spot, it is my husband's tomb" 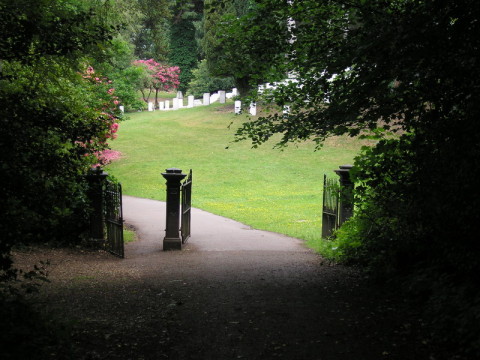 The Cemetery can be reached by walking down a path with trees either side. It is a lovely if not eerie walk, especially in the summer when the trees have their leaves and the path is shaded. Most times I have said hello to joggers or dog walkers so there is always somebody about. The path winds slowly downhill. I should think that the bodies were taken to their final resting place on a gun carriage or hearse. The Commonwealth War Graves Commission look after the WWI and WWII graves and the Cross of Sacrifice and the ground is owned by the M.O.D. It is a lovely place to visit and sit on one of the benches amongst the vast assortment of trees or just wander and read some of the headstones which a lot of people do when I am there looking too. Sometimes there is a distant noise of a football match going on in the playing field at Hamble over the fence and through the trees.

According to the burial registers, there are around 3694 bodies buried here. Some were buried in WWI and then "removed by friends or family" at a later date to be re-buried in their home cemetery.

The 1911 census shows that there was a Cemetery caretaker. His name was William Barnes and he lived with his family Sarah, Ruby and William in a small cottage, thought to be just inside the cemetery gates on the right hand side. Unless you know different???

I would like to thank Sue Ballard for transcribing the Burial Records. She very kindly offered to take the job on and has read through the different records, trying to decipher the different handwriting so that it will make it easier for look ups and research in the future. I don't think that I would have had the time to do it, so I can't thank her enough. Below is the first page of the Church of England Records. There are over 3,000 entries. They are not all recorded here, some I later found on another Burial Record which showed the ladies and children's name instead of "wife of or child of". 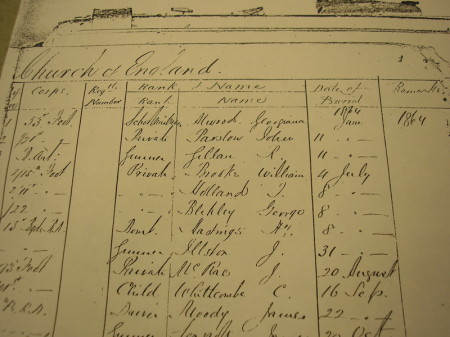 The first person to be buried here according to the Church of England burial register was GEORGINA ATTWOOD aged 24. She died on the 26th May 1864 of "abcesses". She was a school mistress and daughter of WILLIAM ATTWOOD who was a Staff Sergeant at the hospital. William and his wife MARY are also buried in the cemetery separately. On Georgina's headstone is a memorial to CAROLINE, her sister who died in childbirth whilst on her way home from China in 1863.

The 1861 census has William age 50 born in St. Albans, Mary age 56 born in Ireland, Georgina age 21 born in Ireland and William McMullin age 6, grandson born in Barbados. The family are living in the military depot at St. Marys Barracks in Gillingham Kent. 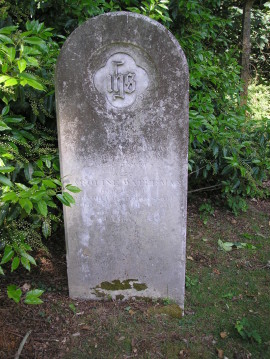 There were 16 Church of England burials in the first year including 2 children.

Private JOHN MURRAY of 88th Foot age 23 was the first to be buried in the Roman Catholic area of the cemetery. He was buried on the 3rd June 1864 after dying of Phthisis (Tuberculosis). There were 10 other burials 8 of which were soldiers and a schoolmaster JOHN COAGHLAN (burial no 8) and a pensioner PETER GERATY? (burial no 10) in the year 1864.

There were 6 burials in the Presbyterian,Wesleyan, Baptist and Methodist section, all soldiers. Private JONATHAN HUNTER from the 9th Foot was the first. He was buried on the 11th June 1864.

There are no headstones for these people remaining. Maybe they just had wooden crosses or just a marker.

The graveyard was closed for burials on 20th November 2003.

Soldiers Of The Queen is a virtual museum of antique Victorian era British Military Photographs and associated biographical research:

Lots of photographs of soldiers in uniform - some may have been worn by those buried in Netley in the early years.

Consecration of the Cemetery.

The larger part of the cemetery was Consecrated on the 27th July 1864. This was the Roman Catholic area just inside the gates and the area up to where the Commonwealth War graves are now. 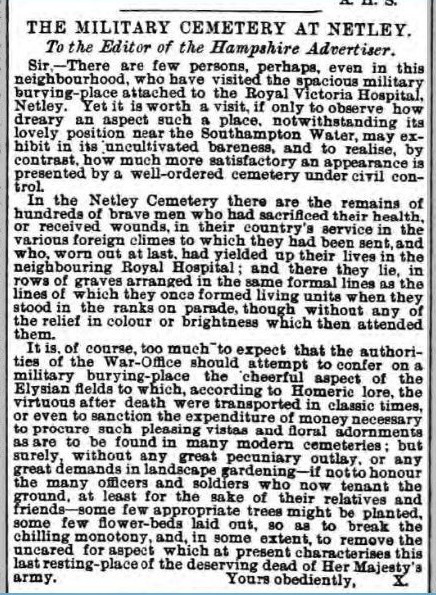 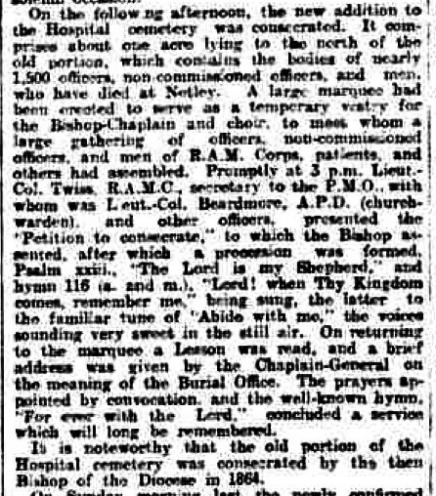 The Consecration of the new part of the Cemetery.