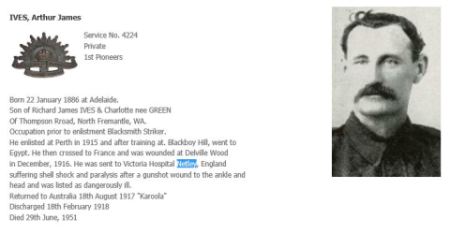 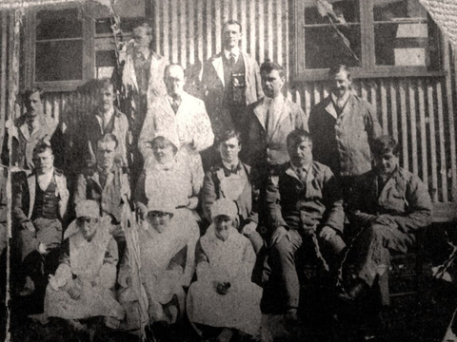 This is a photo from Ann Parker Bell on Facebook. She says it is of her children's great great Grandad who's name was JOHNSON. He is in the middle row on the left. He was at Netley for a while. 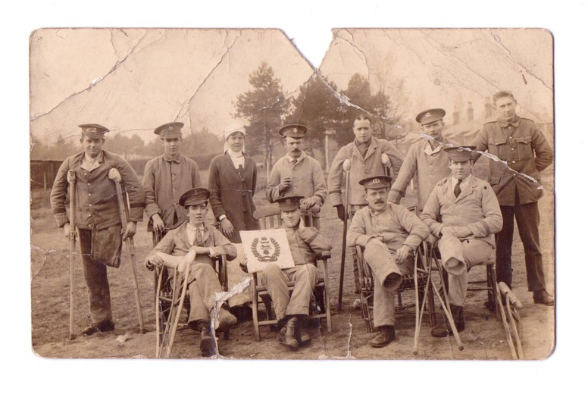 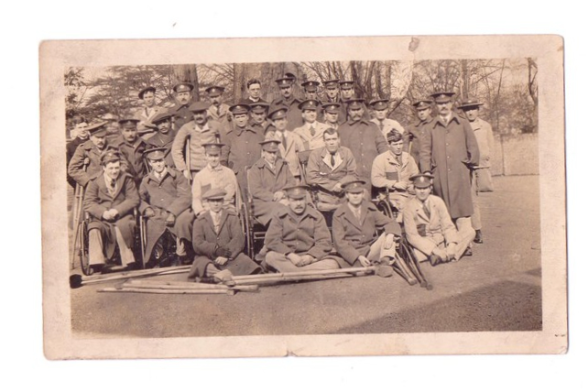 Two photos from Alan Jones. His grandfather Charles was at Netley. 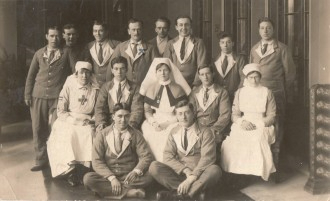 Frederick KEEN was at Netley hospital in 1919 for 6 months with Spanish Flu and double Bronchial Pneumonia. He lost his voice.

Thanks to Ian Thomas on ancestry for this. 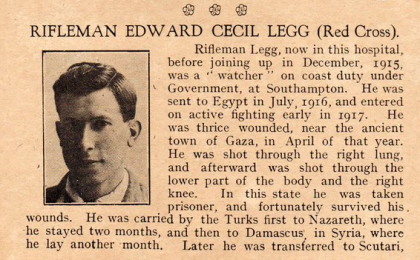 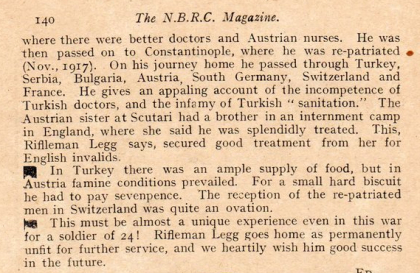 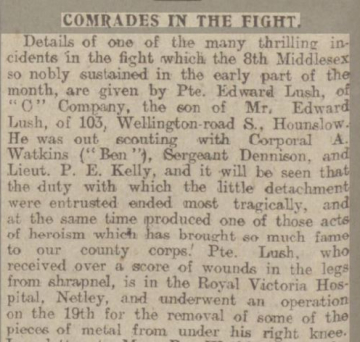 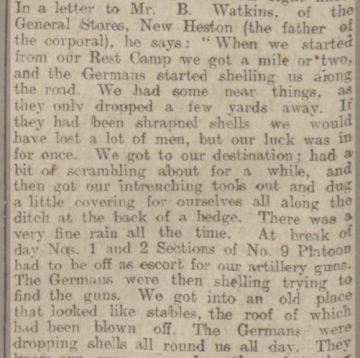 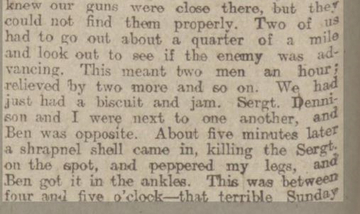 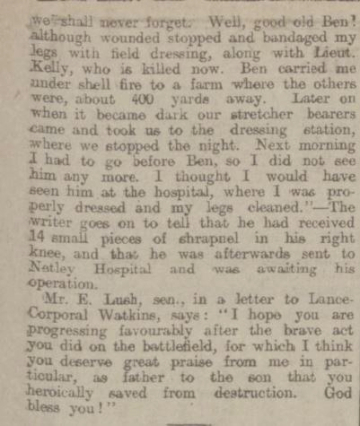 Lieutenant Archibald Cecil MARGRETT was a patient in the hospital for six years...

. On Wednesday 21st August 1918 his departure at Bolougne by the Ambulance transport St Denis arriving at Dover and on the same day being admitted to the Royal Victoria Hospital, Netley, Southampton, Hampshire. He was under their care until January 1924 when he was discharged from the Army on the grounds of ill-health and received a disability pension for the rest of his life. A sad waste of a life? No. After perhaps two years unemployment, with the help of his sister Dorothy, he was employed by Barclays Bank.
http://www.europeana1914-1918.eu/en/contributions/4089#sthash.zgUM3Lpk.dpuf

I received this newspaper article from Richard Coomber. He is researching the effect of WWI on Shipley in West Yorkshire and when he saw it was from a soldier in Netley hospital, asked if I would like it. Thanks Richard.

Jesse MARSHALL from Eccleshill, near Bradford, West Yorkshire was fighting his second war, having won medals in the South African campaign.He was recovering in the Royal Victoria Hospital, Netley near Southampton when he wrote home to a friend.
‘I am going on fine, much better than ever I expected,’ he wrote.‘My thigh is badly damaged but under the most skilful treatment it is doing wonders.
‘There are a lot of Lancashire fellows laid in here and three Burnley chaps are in my ward so you may guess we are having some fine sport. The nurses are splendid and are at it from daylight to dark.
‘I think myself lucky to have got through as well as I have for I might easily have been wounded in the head and in that case I should still have been in France along with thousands more, never to return.
‘As I have lain here in bed quite comfortable and have thought of the poor lads in France, I have shuddered to think of it for only those who have gone through it know what the hardships really are. ‘I have had thirteen weeks in the cold, wet trenches and the sensation is far from pleasant. But there is a Yorkshire saying “Tha can get
used to owt.”
‘My opinion of the Germans is this that they are not worth talking about. Their day of retribution will come and God help them when it does. I would dearly love to be in at the kill. ‘It is terrible to think of the lives that have already been lost but there is sure to be some long list of casualties before the war is finished. Those who are comfortable at home and read the papers cannot dream of the horrors of this war.
‘I am living in hopes of coming home by Easter and then I can chat with you about my experiences at the front.’

BEING wounded on November 9th, my first stop was at a stationary hospital, Rouen, France. I had one operation there, and had some shrapnel removed from my body. One of the pieces was taken from my left shoulder; a nice-sized piece, which is shown in the photograph illustrating this story. When I came to, after being under the operation, I felt something hard on my shoulder. The nurse, seeing that I did not pay much attention to it, came to my bed and asked me if I did not want my souvenir, meaning my shrapnel. Well, as I was in great pain at that time, I did not prize it very much, but I value it quite a lot today.

After a few months in France, they moved me to a Red Cross hospital at Southampton, England, called Netley hospital. I had a long stretch of hospital life in Netley. When I was sailing from France to England, aboard the hospital ship, they asked me where I would like to go. Naturally, being a Canadian, and having no relatives over there, I promptly said, London,[94] so I could meet some of my pals. When I got off the boat, and aboard the hospital train, I asked the orderly if I was near London, and he gave the answer: "Don't worry. You are not going to London. You are on your way to Netley, and will be there in ten minutes."

I was a little downhearted at first, but after a few weeks, I was satisfied with my treatment, which was the very best.

When I got my little lot of wounds, on the Somme, I also was exposed to gas shells, which left my stomach in such a condition that I could not eat for two months until after I had that sea voyage from France to Netley. The nurse there asked me if I would try a poached egg on toast, and that was my turning point. From that day until the day I was discharged I have not missed a meal, except after an operation.

I had nine operations altogether, eight in the Netley Hospital at Southampton, England. After the shrapnel was removed, the doctor found out that the bone in my shoulder was severely fractured, and I had four different operations, just to clean out the loose bone which was keeping my wound from healing. All the time I was in the hospital and even until three months ago my arm was completely paralyzed. But through the wonderful treatment they gave [95]me I am very glad to say I have pretty good use of my left arm.

Another one of my large wounds was in my left thigh, where I lost about eight inches of flesh, from the knee up. I have had four operations on this limb. I lay for eight months in suspense, awaiting the official word, whether I would have to lose the left limb. I can honestly say I had a great deal of confidence in my surgeon, and one day he came to me and had a personal chat with me. He talked to me just like a father. He asked me if I thought I could stand another operation because he stated that I was in a pretty bad condition. I was very anxious to know his view on the subject as I put all confidence in him. I promptly asked him his decision, and he replied that he thought I could stand it. Knowing he thought I could pull through, it did not take me long to let him do anything to get me healed up.

The operation was performed and I had all the skin taken from my right thigh and grafted on the wound on the left. I can say it was a success, and after a few months I was able to get along on a cane. The doctor, seeing I was able to move about, had me sent to a Canadian Hospital so I could be boarded and sent to Canada.

I was in the Canadian hospital for about a month and was very anxious to see my native land again, when one day at noon the word came for me to pack up and get ready for the boat.

After nine days at sea on a hospital ship, with all lights aglow, at the time the Germans were sinking Red Cross ships, we pulled into Halifax, N. S., safe and sound. Here I was detailed off for a hospital, after I had my furlough, to visit my relatives.

After I had seen my people, and was exhausted from talking, and shaking hands with old acquaintances, I reported to hospital again in St. John, N. B., Canada, where I received electrical and massage treatment.

At that time I could not bend my knee, and my leg was stiff, but through the wonderful treatment, and my own will power, I finally got very good use of it before I got my discharge, May, 1918..org 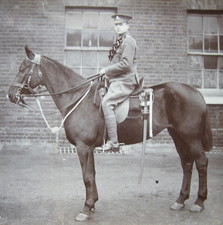 'My Dear Sister
I am back in England again and as you see still in hospital. I have been in bed 8 weeks now with my wounds but they are healing up alright now and I hope soon to be up and I shall then be able to ? at leave and come see you if I don't forget . I hope you are in the best of health also Sam . I cannot write much as my hand is stiff I've had my little finger shot off and also through the stomach but ? are getting better so goodbye for now and let me have a ?. With love to you and Sam from your loving brother Charlie xxxx'

Shortly after writing this letter, he was posted back to the front.

He was killed on the 28th November 1917 and is buried in Vlamertinghe New Military Cemetery.

Thanks to Mel on ancestry for the photos and letter. 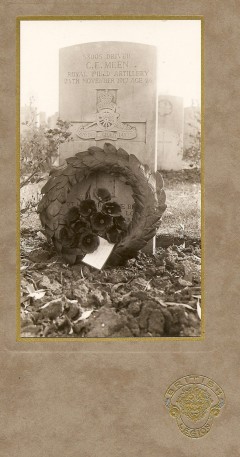 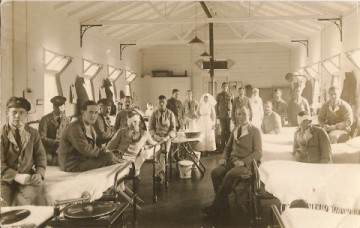 Harold MITCHELL was in ward 12. Thanks to Rosemary Huckett for the photo. He was her Grandfather's brother 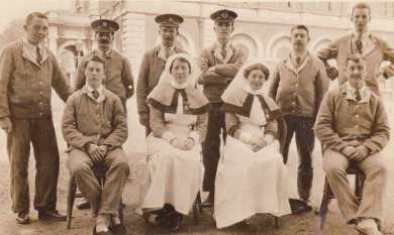 Walter Windust OLIVER was at Netley sometime in 1916 after serving in India. He was later discharged due to ill health. He died in 1950 in Bournemouth.

He is on the far left of this photo which is from the Oliver family tree on ancestry.

This email was from Alan Riley who visited the park and took part in a tour with Owen in 2016. he says:

My Grandfather was No.1172, Gunner Ernest James (Jim) PEACH who enlisted in the Royal Field Artillery on 2nd September in 1914.  He arrived at Suvla Bay, Gallipoli in the early hours of 7th August 1915 with ‘A’ Battery, 59th Brigade RFA, 11th (Northern) Division.  He was evacuated on 13th December 1915 on HMHS Assaye to Malta and I am very fortunate that these records are still in existence.  He nearly died on Malta suffering from paratyphoid but he recovered sufficiently to be invalided back to Engalnd on the Hospital Ship Egypt, arriving at Netley on 4th April 1916.  His stay was quite brief as he was transferred to Addington Park War Hospital on 20th.  The doctors performed tests for Typhoid, Paratyphoid and Dysentery organisms.  The signature is difficult to read, but the Medical Officer in charge looks to be H. McAllen, (McAllison?) though you must forgive me as it is not clear.

My Grandfather has no Silver War Badge and far from being invalided out of the army, he joined 2nd Battery, 13th Brigade RFA and was in Mesopotamia by January of 1917 where he remained until the end of the war. Thank you Alan. 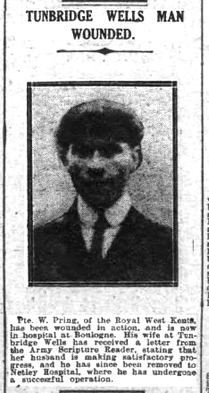 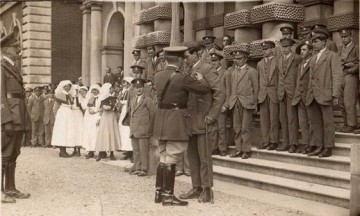 Julie Bussell's Grandfather was Joseph Purdue and here he is receiving the D.C.M. at Netley.

133007 Pte. J. Purdue 45th Battalion was awarded the Distinguished Conduct Medal "For conspicuous gallantry and devotion to duty during operations, August 7th to 11th 1919. He carried a wounded officer for four hours through marsh and forest, and, when the enemy attacked, he showed great coolness while helping to repel the attack.

Thank you for letting me use the photos Julie. 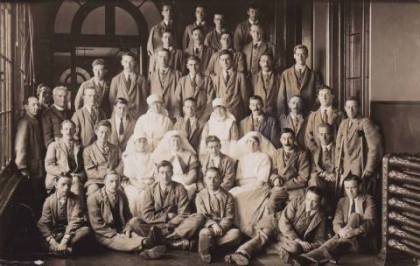 Joseph is 3rd from the left on the front row 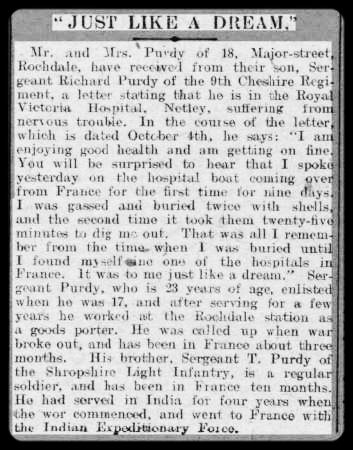 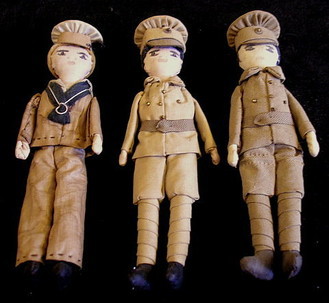