I was introduced to Ed by his brother John whom I met through Facebook. He very kindly said that he would share his childhood memories of growing up and playing in the areas around and inside Netley hospital. What fantastic memories, thank you Ed.

I was born in 1951 and grew up in Hamble, a village just south of Netley hospital along the banks of Southampton Water. At that time only a small part of the hospital was in use, the main building being in good condition but all locked up.

I was one of a group of children who used to roam freely around Hamble often leaving the house in the morning and returning at dusk. That sounds unlikely but remember at that time we had no television and no computers and lived in a semi-rural environment which was considered safe. Our parents I believe didn’t worry about us unduly, that is not to say they didn’t care it’s just that in those days it was what children did. 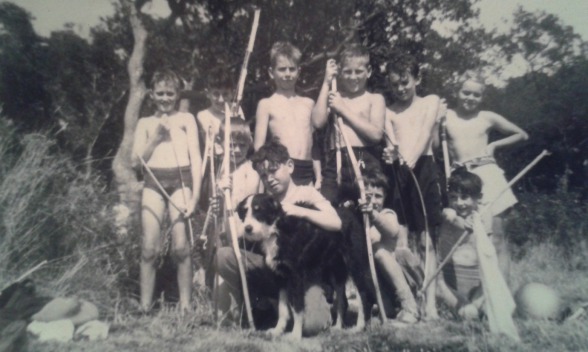 I attach a picture of myself and the other members of our gang. I am on the back row far right standing next to my brother Robert. I remember the names of most of the boys although I lost touch with them many years ago when I left Hamble. The dog “Kim” is mine.

Of course, we used to get up to all sorts of tricks and adventures many of which would sit snugly in a story by Arthur Ransom or Mark Twain.

The hospital to us boys was always surrounded by mystique, it was a fantastic building, looking more like a strange palace with its vast façade of glass topped by several copper clad, verdigris- coated minarets.

We were flatly forbidden to go there, “some odd people, not right in the head” was what we were told. I believe this was a reference to patients of the sanitorium, attitudes were different then! One thing I am clear on however is that we never encountered anyone fitting that description.

The army at that time used to employ military police (or security guards) to patrol the grounds of the hospital and keep the public out.

To a group of small boys all that just made the Hospital an even more attractive place to explore, there was the abstract fear engendered by Mum’s cautions and then the exciting possibility of being nabbed by the guards.

Our rambles would take us into the woods which surrounded the hospital……. Walking past Hamble Cliff House, the path led down past an ancient yew tree and the old stables where Mr and Mrs Munday lived in a somewhat derelict building, then on through a wrought iron gate and into the estate.

We liked playing in the woods, they were vast, overgrown and enchanting, a sort of secret garden.  To get into the woods the route ran past the Eastern edge of the hospital and up past a locked keeper’s cottage.  There was no other way, a dense reed swamp dominated the valley to the rear of the cottage.

Picture a group of small boys with an armoury of catapults, bows and arrows, slings and other warlike devices, trotting past the cottage, every moment expecting a jeep to swerve around the corner of the hospital! Mostly we got away with it, running past the hospital to the right along the road that went toward the cemetery. This road was itself a marvel; it topped a steep embankment which dropped away on either side into thickening forest. We would scatter down these steep slopes at a warning cry. Occasionally we’d be caught, mostly this was by a benign individual who would load us into his car remonstrate with us and then drive us home.

On one occasion however, we were apprehended by two soldiers speeding along in a jeep. I remember running down the slope past the cottage off in to the marram grass growing along the edge of the beach. Peering over the top of the grass I could see the soldiers laying into my elder brother Robert. Naturally I sprang to his defence and was smartly dealt with by a Karate style chop to the nose which left me stunned, covered in blood on my back and crying piteously.

Looking back, I feel they were completely justified, summary justice perhaps but they were probably fed up dealing with bands of marauding youngsters.

Later, undeterred by the fear of getting caught we found ways of entering the hospital building………

I’d like to give you a better picture of our “gang” it was not as you might understand in the modern sense of the word, we were an innocent bunch of children who lived out a kind of pastoral idyll in the countryside around the village.

We were the children of mainly factory workers employed in one of the five aircraft factories in Hamble.  Our house was on an estate built between the wars especially for the employees of what was then Hawker Sidley building parts for spitfires. Cliffe Avenue where we lived was right outside the gates of Follands, which in the 1950s, employed  thousands of workers in the manufacture of the Gnat jet aircraft. My father at the time ran a green grocery business delivering fresh fruit and vegetables from a cart drawn by our giant shire horse, Nobby.

On our estate  lived several families with boys about the same age as me. We would congregate in the street to play games such as L-O-N-D-O-N London! and “draw a line right down your back and guess who touched your tail” etc.

One of our favourite games was “Fox and Hounds” In this game the group would be split in two, half being the foxes, the other half the hounds, the first group would set off at a fast trot racing up the street around the corner and off who knows where? The second group would wait say fifteen minutes and set off in pursuit. The chase would range over the surrounding countryside a radius of about 10 miles.  It might seem an impossible task but in fact it was easy as the hounds had a secret weapon, the dog! Kim had a brilliant nose with (to us) amazing powers of divination. Unleashed at the command of “Get them boy!” he would tear off up the road with us all in hot pursuit. The hunted would have meanwhile found a variety of hiding places.

A favourite hiding place was Hamble Common, a waste land of ferns growing to (boys’) head height. I can remember being concealed in a dense jungle full length on a soft ochre bed of decaying, mouldering bracken with overhead viridian fern fronds filtering shafts of sunlight, the odd spider or snake unnoticed while listening keenly for the sounds of pursuit.

Distant sounds, a dog barking, calls, braying and cheering, another victim captured, finally resolving itself into the snuffling burrowing sound of the dog and then bracken trampled underfoot……………

One day in our rambles we ventured again to the hospital, how could we keep away? To the rear of the hospital we found a derelict railway station with Victorian sidings and multiple platforms. Beyond this was a huge, black painted doorway, boarded up but in the centre a very small door or hatch left open.

In no time we had clambered through and on in to the hospital. There were about five of us, though I can’t remember who, we ascended endless staircases and walkways to emerge finally at the front of the hospital on an impossibly long corridor (I’ve since learned about ¼ mile long) with tall sunlit windows facing out over Southampton Water. On the other side a series of small rooms going off into the distance, shafts of light penetrating the gloom. We crept along, for we were in awe of the splendour. To our amazement we came across what appeared to be a hand operated lift made, as I remember, of ornate cast iron with a dangling heavy chain to operate it.

Suddenly there was a shout! Looking to the far end of the corridor there were two soldiers speeding toward us, I can, even now, hear their hobnail boots clanging on the floor of the corridor as they ran.

We had learned from previous experience that where soldiers were concerned you didn’t hang about, so we turned tail and fled.

The hospital was an amazing labyrinth of darkened rooms and corridors so in no time at all we had lost them ending up on the very top shelf of a giant linen cupboard. In the darkness we all held our breath as we heard the boots of the soldiers approaching accompanied by “Come out you buggers” and the opening and closing of doors. Suddenly our cupboard door was thrust open. Through the slats of the shelf I could see a pair of highly polished hobnail boots. Fortunately for us the soldier did not have a torch or no doubt we would have been spotted.

We all, curled up tight at one end of the shelf, held our breath for what seemed an age. Eventually the owner of the boots grunted, turned around and left closing the door behind him.

What were we to do now? There followed a whispered conflab, should we sneak out? No! They were bound to be waiting for us. So huddled up close we kept completely silent for what to the childish mind seemed hours and hours but in fact probably about 5 mins.

We drew lots as to who would go on a scouting mission to see if the coast was clear. It was, so out we went. We made our way gingerly to the small entrance door, no sign of the soldiers. This time it was Doug’s turn to be first out (he’s the boy in the picture front row bottom left)

Silently he snook up to the small hatch, stuck his head through and quick as a flash stepped back, “scarper quick”! A soldier had made a wild grab at him but missed. Luckily Doug was very quick on his feet. He ducked out of the way and joined us as we once again fled up the corridor. It took a while for the soldier to get through the small hatch, but by then we were long since gone. This time we sped right up to the other end of the building and discovering a series of steps began to ascend.

Incredibly we emerged under one of the cupolas right at the top of the building. From this lofty vantage point we had a grand view of Southampton Water and surrounding landscape, and, more importantly, the soldier’s jeep parked just outside the rear of the hospital.

We waited in that cupola most of the afternoon and on in to the summer evening sheltering under the roof and keeping our heads low. From time to time we observed the soldiers emerge from the hospital and take a breather, leaning against the jeep nonchalantly smoking a ciggy.

Eventually they gave up and drove off; we were down the stairs in a flash but decided, this time, to exit by opening one of the windows to the front of the building and scampered across the extensive lawns down to the beach.  The soldiers hadn’t given up however. We could hear the engine of their jeep as it approached, then they leapt out and ran down the beach to intercept us.  This time we decided to brazen it out.

“You boys haven’t been inside the building, have you? “