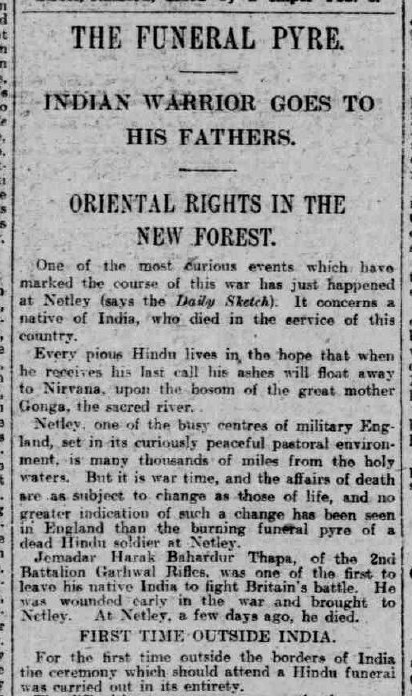 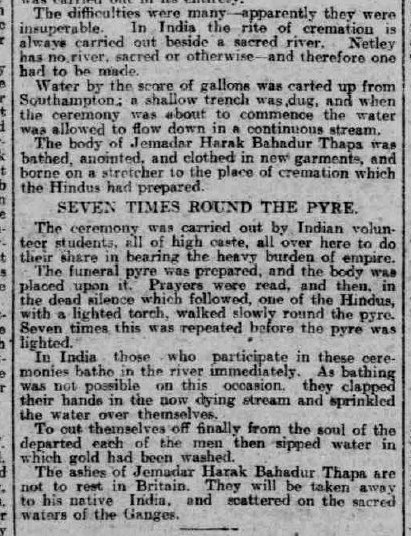 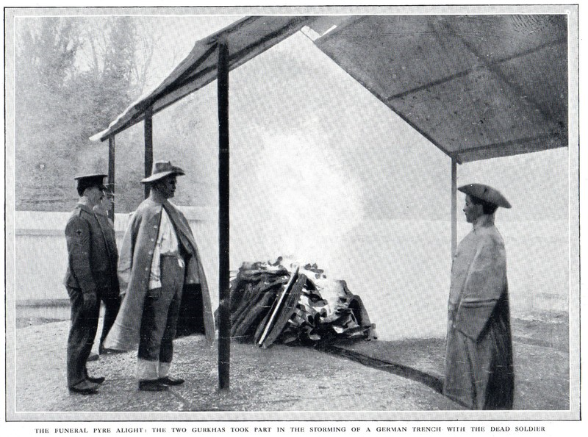 The photos above are from the Graphic August 21st 1915

One of the most carious and pathetic events which have marked the course of the war (writes our London correspondent under date April 13th (1915) happened recently at Netley in connection with a Hindu soldier who died in the service of the Empire.

Every pious Hindu lives in the hope that when he receives his last call his ashes will float away to Nirvana, upon the bosom
of the great mother Gunga, the sacred river which we know as the Ganges.
Netley, one of the busy centres of military England, is many thousands of miles from the holy waters, but in war time the affairs of death are as subject to change as those of life, and no greater indication of such a change has been seen in England than the burning Funeral pyre of a dead Hindu soldier at Netley.
Jemadar Harak Bahadur Thapa, of the 2nd Battalion Garhwal Rifles, was wounded early in the war and brought to Netley, where a few days ago he died. Probably for the first time outside the borders of India, the ceremony which should attend a Hindu funeral was carried out in its entirety. The difficulties were many apparently they were insuperable. In India the rite of cremation is always carried out beside a  sacred river. Netley has no river, sacred or otherwise, and therefore one had to be made. Water by the score of gallons was brought up from Southampton, a shallow trench was dug, and when the ceremony was about to begin the water was allowed to flow down in a continuous stream. The body of Jamadar Harak Bahadur Thapa was bathed, annointed, and clothed in new garments, and borne on a stretcher to the place of cremation which the Hindus had prepared.The ceremony was carried out by Indian volunteer students of high caste. The funeral pyre was prepared, and the body was placed upon it. Prayers were read, and then one of the Hindus, with alighted torch, walked slowly round the pyre. Seven times this was repeated before the pyre was lighted. In India those who participate in these ceremonies bathe in the river immediately after, but as bathing was not possible on this occasion they dipped their hands in the artificial stream and sprinkled the water over themselves. To cut themselves off finally from the soul of the departed, each of the men then sipped water in which gold had been washed. The ashes of Jemadar Harak Bahadur Thapa are not to rest in England.They will be taken, away to his native India and scattered on the sacred waters of the Ganges. 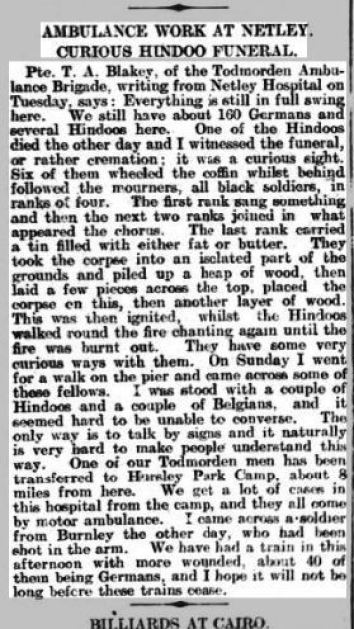