DEATH OF A HEYWOOD SOLDIER.

News has been received of the death of Sergeant J. C. Maguire, a Heywood postman. who was called up as a memo man in December, 1899, to serve in South Africa. He died in Netley Hospital, where he had been for about seven months, after seeing much service in Africa with his regiment, the Kings Royal Rifles. He was with Buller's army, and participated in the relief of Ladysmith. He commenced to be ill in South Africa, and was invalided home. On arriving in the country he was taken to Netley. Deceased was engaged as a postman in Heywood for about three years and resided in Starkey Street. He leaves a Widow, but no children. The internment took place at Kelley on Monday. Wreaths were sent from Heywood Poet Office by Mr. S. Davenport, the postmaster, and the clerks, and by the postmen. 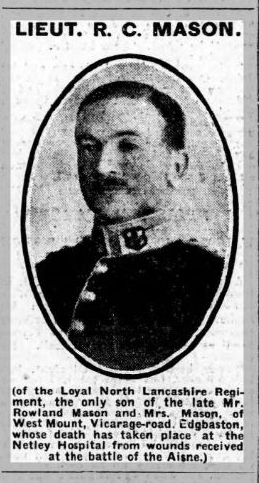 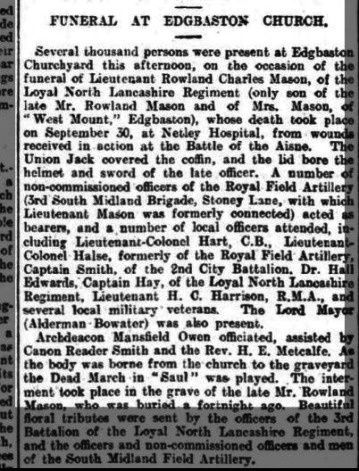 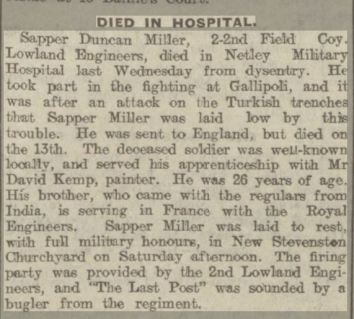 William John MORGAN, a Private in the 2nd Shropshire Light Infantry and a Brynmawr man was invalided home from the front where he was fighting with his regiment and died at NH of enteric fever about 15/06/1900.  He was one of the best forwards of Brynmawr’s Rugby Team and leaves a widow and one one child.  He is buried in Brynmawr. 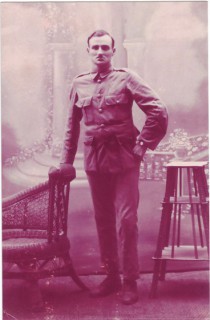 Lewis Moses enlisted at Ammanford in April 1915 and his name appears on the Roll of Honour of volunteers in the local newspaper – the Amman Valley Chronicle. He joined the 15th Battalion, Welsh Regiment. This was known as the Carmarthenshire Battalion as it was made up largely of men from Carmarthenshire although there were around 300 men from Lancashire (mainly the Bolton area) in their ranks. However, to all intents and purposes this was a Pals Battalion, about a thousand strong, made up of local men who would have known each other before their enlistment.

According to his Medal Index Card, Lewis’s overseas service started on 5th December 1915. This was the date that his battalion arrived in France. It is notable that a service was held at Winchester Cathedral for the Welsh Division the evening before they set off for the coast and Welsh hymns were sung (probably for the first and last time at that cathedral). It is not known whether Lewis attended this service or indeed how many of the Carmarthenshire Battalion were present. It is likely however that they would also have had their own smaller service before setting sail for France.

Lewis was about to take part in one of the most famous battles in British history – the battle of the Somme. This battle proved to be the most costly battle of the First World War and the casualty figures from the first day are the worse ever suffered by the British Army throughout its history. As for Lewis, like so many of his fellow Welshmen, his battle had ended much earlier. It is not known exactly when Lewis was seriously wounded but it was most likely sometime on 10th or 11th July. According to his death certificate, he suffered a gunshot wound to the spine which paralysed him. A single gun-shot wound would suggest he had been shot by a sniper.

Once wounded he would have been picked up by stretcher bearers and taken to the nearest Casualty Clearing Station before being placed in a hospital truck and eventually sent back to the Base Hospital at Rouen. He remained there a couple of weeks until he was stabilised.

Unfortunately on 4th August Lewis died of his wounds at the Royal Victoria Hospital, Netley, Southampton. His death certificate identifies the cause of death as (1) Gunshot Wound to Spine (2) paraplegia & septicaemia. It is not known whether any of his family were able to be at his bedside when he died or had had the opportunity to go to Southampton to see him. What is known is that they were determined to get his body back to bury him in the local chapel cemetery.

Bearing in mind that his father had been unable to work for months due to his own ill-health it was no small thing to pay for the cost of the train journey for the coffin from Southampton back to Brynamman. However this is what happened and this too is noted in the Amman Valley Chronicle n 10th August:

‘The body of Lewis J. Moses was brought for interment at Brynamman by train on Saturday night from Southampton. Deceased was seriously wounded in France. He was temporarily treated at Rouen in France, and subsequently brought to Southampton where he died on Friday morning. About 500 escorted his remains from the train to the house, despite the lateness of the hour. He was 29 years of age and had been in action about 16 months with the 15th Welsh. The burial took place on Tuesday at Siloam Chapel.’

My thanks to Wendy Edwards.

Allen Moyer died July 25th 1918 at Netley and was buried in the cemetery. His body was later removed and taken to Knoxville USA.

Here is one of our (local) Australian Soldiers admitted to Netley Hospital WW1.

From Joanne Klein, thank you. 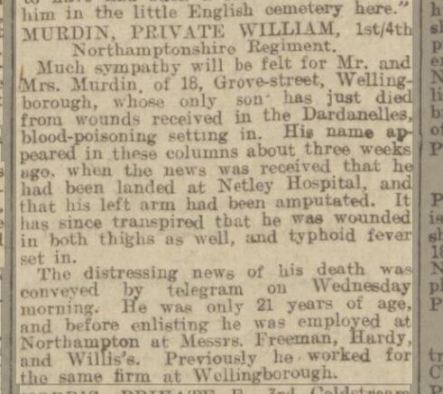 15469 Alexander Ness was born in East Lothian, Scotland in 1890 to William and Margaret.He was in the Cameron Highlanders. He died in Netley Hospital on 7th May 1915 and is buried in Stenton Churchyard - stone no 104. 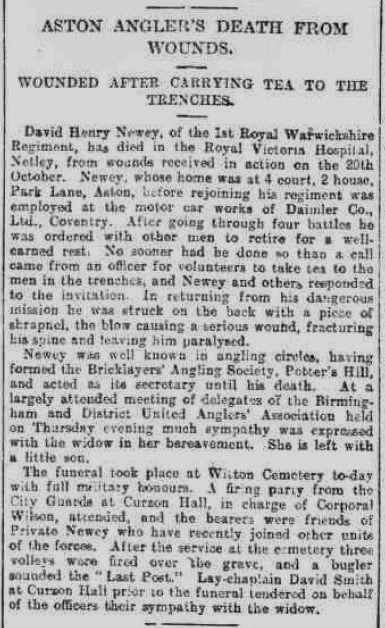 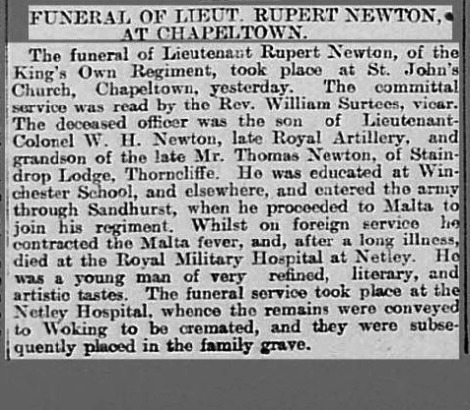 Sapper Charles Herbert Nicholson died on 20th December 1900 and is buried in Ecclesall Churchyard. Thanks to Michelle Price.

He enlisted in Newmarket.

He died in Netley Welsh Hospital near Southampton. Without his Army records we cannot be exact, but it seems very likely he was wounded during the early days of the Somme offensive which started on 1st July 1916. The 11th Battalion, the Suffolk Regiment suffered more casualties than any other battalion in that battle.

Thanks to Tony Pringle. 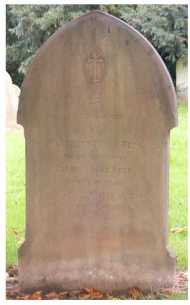 In an obituary notice which appeared in our last issue, we unfortunately confused the name of Lieutenant-Colonel Perrier, with that of his now deceased brother, Major Charles David Perrier, of the 14th regiment. We understand that there are four members of the family who hold commissions in the army, and we regret that impression was inadvertently conveyed to us that it was Lieutenant-Colonel Perrier who had died at Netley.

Major Perrier, we understand, only arrived in the troopship Crocodile from Bombay at Portsmouth on 2nd last, and, being of ill-health, was taken to tho Royal Victoria Hospital at Netley. 1t was thought that the Major was making satisfactory progress towards recovery, and the sad tidings of his death were quite unexpected. Much sympathy has been expressed with the family in their sad bereavement. 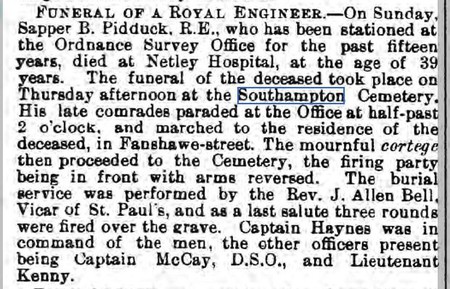 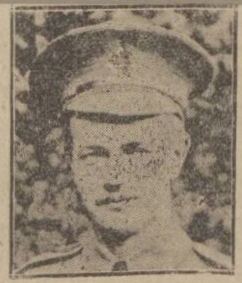 Pte. James Potter died at Netley in June 1917 and he is buried in Beer, Devon.

Charles Arthur Rabone died at Netley on 15th December 1930 and is buried in Lodge Hill cemetery.

He was buried in the churchyard at St Nicholas’ Church, Brockenhurst, Hampshire on 1st March 1918, officiated by Reverend W R Hutchinson.

Thanks to Clare Church for this.

According to the obituary published in the Newton and Earlestown Guardian on May 4th 1917, he unfortunately met with an accident and was ruptured by some sandbags falling on him in the trenches. He was a bomb thrower. He was invalided home and recovered sufficiently to go out again.

Corporal Richards received gunshot wounds to his legs during a battle on Sunday April 15th 1917, probably during the Battle of Arras. One leg was amputated and he was taken to Netley. He died of pneumonia.

He is buried in Newton-le-Willows Cemetery in grave NC 4319. From Earlstown War memorial page.

George Routley died at Netley on 7th September 1916 and is buried in Avon View cemetery Bristol. 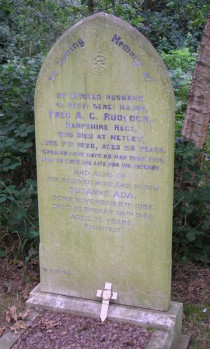