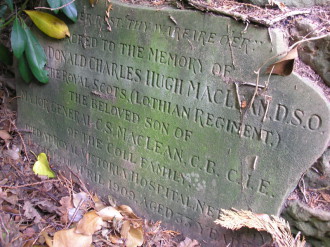 The Beloved Son Of

Of The Coll Family

Burial no 1498 Church of England 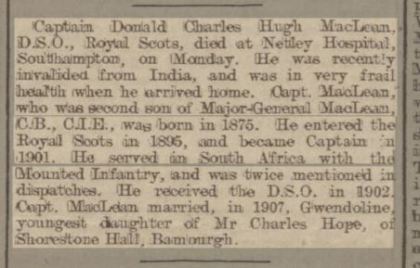 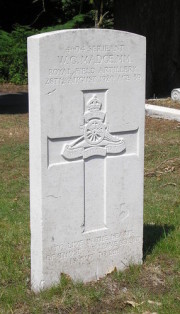 4604 Sergeant William.George MADGE Royal Field Artillery died 28th September 1920. He was awarded the Military Medal for bravery in the field in 1918

William was a boot maker before he signed up in London on 5th February 1900.

1911 census has William a Bombardier age 29, single, born in London, in India.

Burial no.2037 Church of England

John was married to Elizabeth Howard Maynard. His name is featured on the soldiers who died in WW1 page for the Alleyn’s School of which he attended.

Photo information: He was wounded on Aug 23 1918 when in command of his battalion.

Other information: EA Mag: 'died of wounds at Netley Hospital... after nearly 3 yrs' continuous service in France. He was a very keen soldier, obtained rapid promotion, and was awarded the Military Cross in 1917.

Burial no. 1979 Officers Church of England 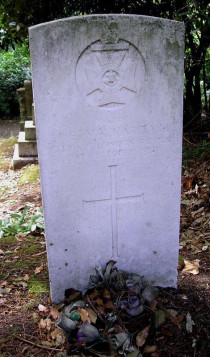 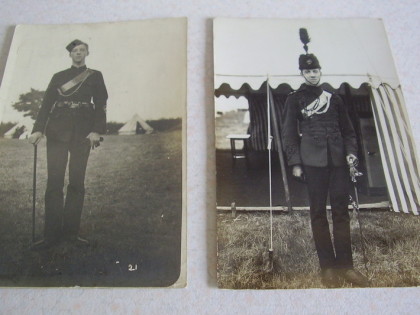 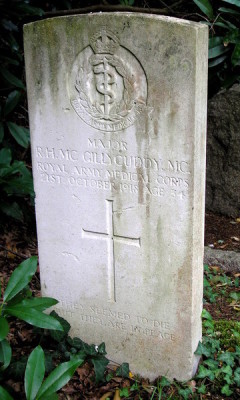 Richard was born 15th September 1883. He was the son of Dennis Charles McGillycuddy and Gertrude Laura Miller. He married Ethel Florence Lukey.

Educated at Fettes College (Army Class), Edinburgh from 1898 to Dec 1900 and was a student at Univ. College London in the Faculty of Medical Services from 1901 to 1907 and at University College Hospital (MRCS, LRCP, 1911).
2nd Lieut., 4th Bn, Royal Munster Fusiliers, 1902-1906
Then appointed District Medical Officer, Borough of St. Pancras
In practice in West London until the outbreak of war
Lieut, RAMC, 4 July 1915
Attached as Medical Officer to the 9th Bn, KOYLI
Took part in Battle of Loos in Sept 1915 and served with the Battalion until Spring 1916 when he was invalided home
Military Cross, London Gazette 14 Jan 1916 (dated 1 Jan 1916)(a New Year's honour so no published citation)
Mentioned in Despatches
Captain, 4 July 1916
Major, 1917
Adjutant HMNT Aquitania
Later medical officer in charge of HMNTT Aberdonian and Formosa
Died at sea of pneumonia on 20 Oct 1918

Burial no. 1980 Officers Church of England 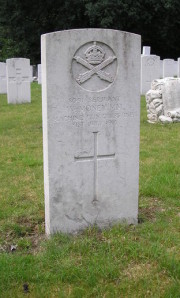 1911 census has a Private William Money age 26 and single at the Hillsborough Barracks in Sheffield. He was entitled to the Indian General Service Medal with clasp enscribed “North West Frontier 1908”

William was awarded the Military Medal.

Burial no 1828 Church of England 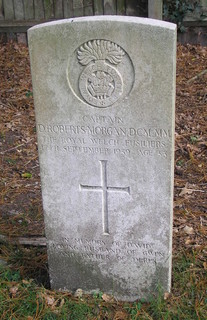 15822 Captain David ROBERTS-MORGAN Royal Welch Fusiliers died on the 17th September 1939 age 53. He was awarded the Distinguished Conduct Medal “For conspicuous courage and ability when, as platoon serjeant, he organized bombing parties against the enemy in dug-outs who would not surrender” (19th August 1916) He was 9358 Sjt D. ROBERTS –MORGAN IN 1916. He was also awarded the Military Medal.

His parents were Ebenezer Morgan and Annie Roberts-Morgan. His wife was Gwendoline and he had a son Derek. 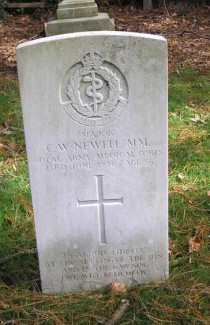 At The Setting Of The Sun

And In The Dawning

Burial no 2216 Church of England

Below is about Major Newell's wife who died two years before him.

Mrs Constance Dora Newell appears to have been killed when a V2 rocket hit the Woolworths store in London. The following information is from

Contemporary reports from a number of witnesses indicate that the V2 had been seen in its last moments of flight, a line drawn across the grey November sky.The store bulged outwards and then imploded and in the carnage 168 people were killed and 121 were seriously injured. It was the 251'st Rocket to be successfully launched. This was the worst tragedy in the entire V weapon campaign and one of the worst civilian disasters of World War II.As the store exploded there was blinding flash of light and an enormous roar followed by a dense cloud of smoke and powdered dust. Witnesses several hundred yards away felt the warm blast on their faces,some were physically pushed backward by its force. The Co-Op Store next door also collapsed killing more people inside. The bodies of passers by were flung for great distances, and an army lorry was overturned and destroyed killing its occupants. A double decker bus was spun round causing yet more deaths and injuries,its occupants were seen still sitting in their seats covered in dust..There were piles of masonry and pieces of bodies all around, where Woolworth's had been was just an enormous gap.The debris stretched from the Town Hall to New Cross Gate station and it was to take 3 days to clear this and to retrieve all the bodies from the debris.Today the site has been totally re-developed but the extent of the damage area can be seen from where the new buildings commence both in the New Cross Road and in surrounding streets. Lewisham council have erected a blue plaque on the building to commemorate the tragedy.) 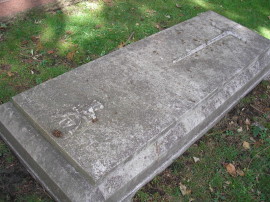 For conspicuous gallantry and devotion to

duty. He exposed himself freely under

heavy fire in order' to visit all portions of his

check into a successful offensive. 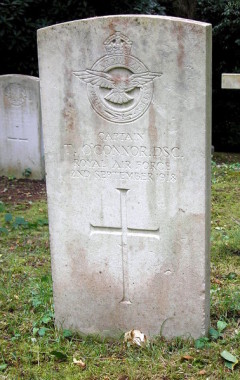 Captain T. O’CONNOR Royal Air Force died on 2nd September 1918 age 36. He was awarded the Distinguished Service Cross. This is all I have found out about this man so far.

Burial no.1970 Church of England

Have Mercy Upon Him Lord

And Let Perpetual Light Shine Upon Him

Herbert received his Military Medal for his actions “at Messines during operations from the 7.6.17 to 11.5.17. Pte. Perkins did very excellent work as a stretcher bearer carrying wounded men back from front line to regimental aid post under very heavy artillery and machine gun fire showing utter disregard to personal safety.”

He died on board H.M.A.T. Essequibo due to a bullet wound through the left lung (received in action) haemorrhage and heart failure.

Herbert was 34 years old when he signed up on the 3rd May 1915. He was a labourer and unmarried. His parents were George and Ann Mary Perkins from Launceston Australia.

﻿The grave will be turfed and an oak cross will be erected by the A.I.F. London. 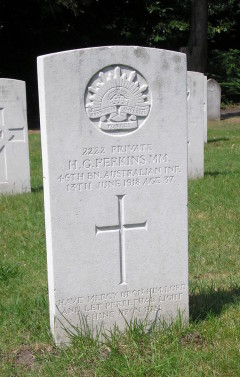 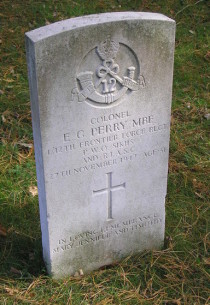 His parents were Herbert and Catherine and he was married to Constance Mary.

Burial no 2218 Church of England 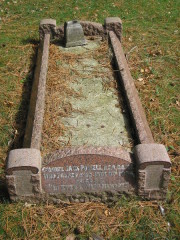 "In Ever Loving Memory"

Colonel Powell was living in Alderbury Rd, Oxford at the time of his death. 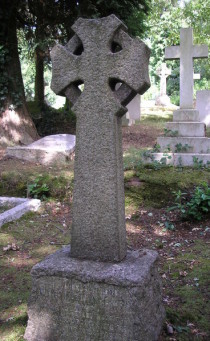 Annie was a masseuse at Netley

Burial no.2050 Church of England

Annie Vincent price was 48 in the 1911 census and was with her mother Catherine Sharrock Price age 77 and sister Florence Dupen? Price age 43, both single. Annie was a masseuse. Catherine had 9 children of which one died.

They are all living at 19 York Crescent Road, Clifton Bristol.

Annie's brother was Walter Samuel Vincent Price, Master Mariner, Lieut. R.A.F. and he  died in September 1921 in Johannesburg. Not sure of his burial place. 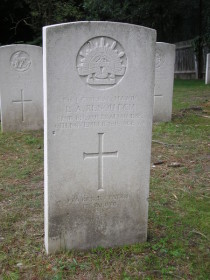 Lawrence was born in 1892 son of Frederick and Henrietta, in Seymour Victoria. He was a Civil Engineer before he signed up.

Lawrence received the Distinguished Conduct Medal for conspicuous gallantry in action. He carried out patrol work during a heavy bombardment. Later, in order to build a barricade, he filled sandbags for one and a half hours under very heavy fire. He showed a splendid example of courage and determination throughout. 14.11.16 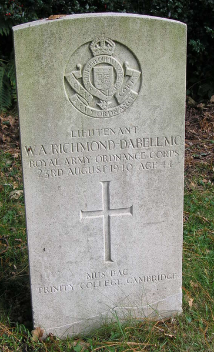 In the 1914-1918 war, William was a Captain in the Northumberland Fusiliers

Son of A. Richmond-Dabell and Beatrice.

Burial no 2203 Church of England 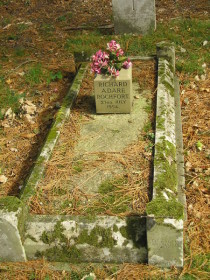 He was born in Surrey in 1879. His medal cards records that he was a Sergeant in the Grenadier Guards then a Captain in the Royal Inniskiling Fusiliers.

His Distinguished Service Order was awarded for conspicuous gallantry, devotion to duty and initiative during operations near Poelcappelle.

On the night of the 11/12th October 1917 when the Battalion was moving up the line to it's forming up position ready for the attack on the following morning, it was heavily engaged by the enemy with shells and gas. He perceiving that there was danger of the Batalion losing it's way owing to the necessity of having to wear gas masks and the intense darkness of the night, he placed himself at the head of the leading party and guided it along the correct route. It is certain but for this prompt action the Battalion would not have reached its forming up place in time.

During the operations on the morning of the 12th, owing to the heavy and difficult condition of the ground and the hevy shell, machine gun and rifle fire, the Battalion experienced gret difficulty in pushing forward, he immediately went forward to ascertain the situation and encouraged the men by his example.

Although severely wounded while leading the men he remained with them for nearly two hours encouraging them in their work until through sheer exhaustion he was forced to desist. This Officer by his cheerful and inspiring personality and by the exceptional bravery of his conduct set a magnificent example to all ranks.

He was so badly wounded that his arm had to be amputated on his arrival at the dressing station.

This record comes from the Australian War Memorial page from Australia. Have no idea why it's on there.

The Index of Wills and Administrations states that Richard was living at Wedge Farm Itchingfield Horsham Sussex. He died at the Royal Victoria Hospital Netley and probate was given to Amy Ross Robinson. 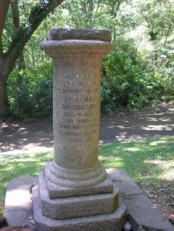 Among The Chosen Few

Among The Very Fine 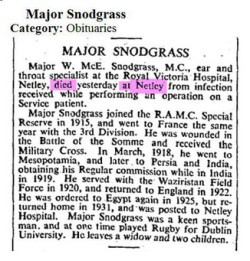 Lieutenant Alexander VINGOE died of TB (aged 47) on troopship HMT Navasa on 25th December 1928 and is burial number 2121 but has no headstone. His grandaughter Sheena said that he was "born in Ramsden Oxfordshire. He joined the Kings Shropshire Light Infantry date not known. 1914/1918 Staff Sargeant 2nd Indian cavalry division.1925 Staff Sargeant Major eastern command. His rank when he died was Assistant Commissary and Lieutenant M.B.E. 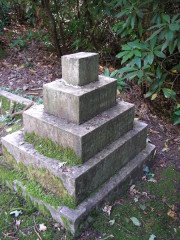 Possible marriage to Margaret Spencer Bull on 27th August 1908 in Kashmir Hormozgan Iran.Youngest child Timothy Seddon Wildblood was born in Egypt in 1920 and died in 1940 in the Channel Islands. (Ancestry. co. uk tree)

1923 passenger lists has Lt Col. Wildblood and his wife and child coming to London from Bombay India on the Kaiser-I-Hind 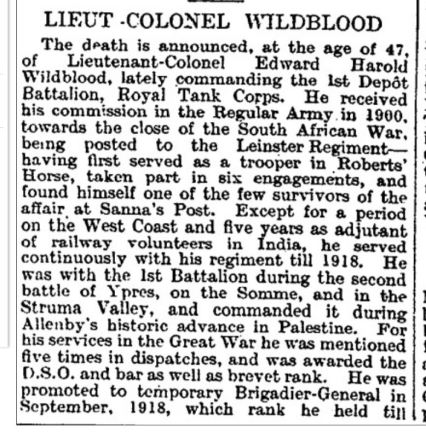 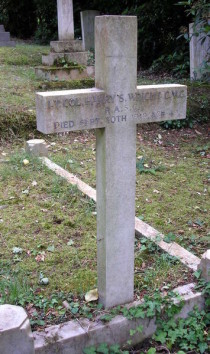 “The Order of Saint Michael and St George is awarded to men and women who render extraordinary or important non-military service in a foreign country. It can be conferred for important or loyal service in relation to foreign and Commonwealth affairs.” Wikipedia

He was born around 1871 in India and was married to Wilhelmina Margaret.

1911 census has Harry 39, wife Wilhelmina 34 (born in India) and daughter Iris (born in Brighton) living at Weston Farm House with two servants. Harry is a Captain in the ASC (at Netley?)

Burial no. 2018 Officers Church of England 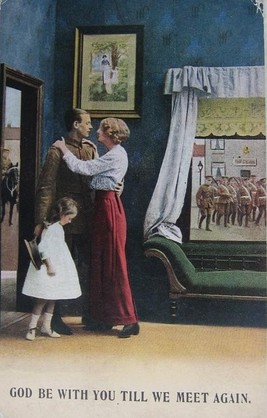