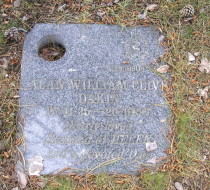 and a devoted Dad

There is no burial record

There is no headstone. 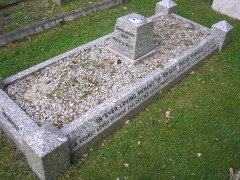 In Ever Loving Memory of Ernest Edgar DANIELS

Burial record no 2222 Church of England. Ernest was a civilian Gate Policeman age 62. At the time of his death, he lived in the Lodge at the hospital. MaryAnn's ashes are buried in a casket in her husband's grave. 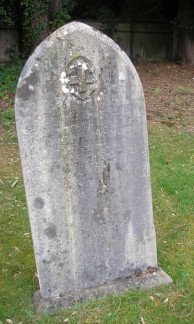 The Beloved Husband of

His End Was Peace

He was married to Emma Thorn who was the eldest living daughter of Joseph and Mary Thorn.

Emma's eldest daughter was Mary Ann Esther Thorn who died as a baby and is buried in Netley. (See Children's Burials)

Burial no 1526 Church of England 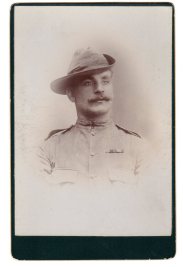 This is a photograph believed to be of George. Brenda Bax kindly sent it to me. Thank you Brenda. 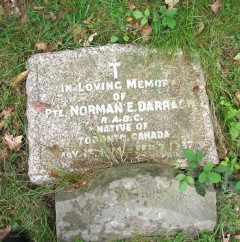 Burial no 2175 Church of England 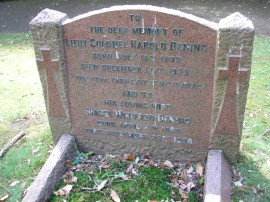 To The Dear Memory Of

The Work Thou Gave Me Is Done

And To His Loving Wife 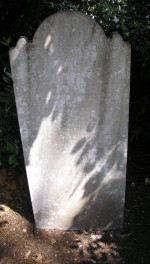 Henry is between burial record no 45 and 46 in the Church of England part. It says, Henry Dewey a marine, has tombstone. 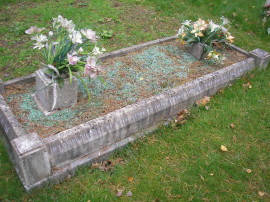 Ernest was thought to be the boilerman who worked in Netley hospital and in the N.A.A.F.I.

Burial no. 2239 Church of England for Ernest 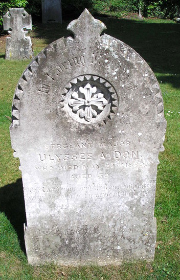 The Lord gave and the Lord hath taken

Blessed be the name of the Lord

Burial no. 585 Church of England

1861 census states that Ulysses was born in Scotland and  he was in Her Majesty's 25th Regiment the King's Own Borderer's in Aldershot.﻿ 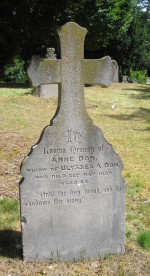 Widow of Ulysses A. Don

Until the day break and the shadows flee away

They died on the same day, 19 years apart. 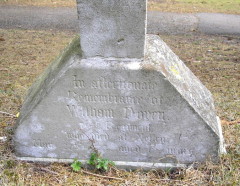 Burial no. 299 Church of England 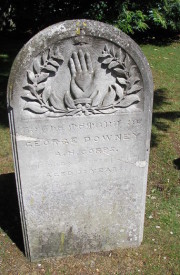 Burial no. 232 Church of England 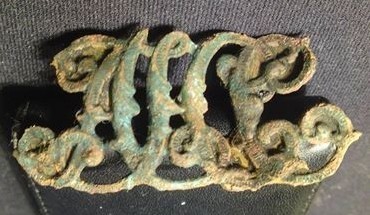 This AHC badge was found in Netley. It must be from a soldier in the Army Hospital Corps like George Downey.

Thanks to Steve Cann for the photo. 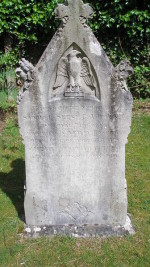 Who Died In Netley Hospital

Sleep Beloved And Take Your Rest

Erected By His Sorrowing Wife

The following information comes from Jim Lees who has researched Charles Albert.

Charles Albert Downey was born in Leeds, Yorkshire in 1874, son of Henry Downey, a shoemaker, and his wife Emily.

A thorough search of the 1881 and 1891 census returns failed to find the Downey family so it is my belief that Henry Downey was probably serving as a shoemaker in the British Army, which may explain the absence. One small piece of evidence that supports this is that his son John was born in Aldershot, the home of the British Army. I was able to find them in the 1901 census by which time they were living at 11 Camera Gardens, Chelsea, London. This address is also recorded in Charles’s service documents as his next of kin’s address.
Henry Downey was a shoemaker by trade, aged 53 and born in Ireland. His wife

Emily was a laundress aged 52 and was also born in Ireland. Their son John was employed as a gardener, aged 17 and born in Aldershot. Charles was of course serving in the Army at this time, although he is listed in the Census taken at Shorncliffe Camp, Kent.

Charles Albert Downey was employed as a saddler before attesting for the 1st(Royal) Dragoons at London on 15 January 1894, a month short of his 20th birthday. He was described as 5 feet 9⅝ in height with brown hair, grey eyes and a medium complexion. His declared his religion as Roman Catholic and he joined his Regiment in Dublin on 19 January 1894. He was allocated regimental number 3719.

Private Downey was granted his first good conduct badge on 15 January 1896 and was appointed Saddler on 9 October 1896. He was promoted to Saddler Corporal a year later on 9 October 1897 and on 14 December 1897 he extended his service to complete 12 years with the colours. The regimental muster roll for 1898 records him serving in‘A’ Squadron at Woolwich.

The Royal Dragoons was ordered to mobilise for service in South Africa on 7th October 1899 and eventually received their sailing orders to embark at Tilbury on the SS Manchester Port three weeks later on the 29 October. Unfortunately, due to unavoidable delays, they did not embark until Monday 30 October. Saddler Corporal Downey accompanied his regiment to South Africa arriving on 22 November 1899 the regiment forming part of Lord Dundonald's Mounted Brigade and was present at the actions of Colenso, Acton Homes, Vaal Krantz and Botha's Pass.

Saddler Corporal Downey was promoted to Saddler Sergeant on 24 December 1900 and served throughout the Boer War. He was recommended for reward by his commanding officer for his services in South Africa but it seems he received no recognition of his good services during the Second Boer War.

After returning to England on 7 July 1902 Sergeant Saddler Charles Albert Downey married Charlotte Prior at St Luke’s Church, West Ham on 28 September 1902. On 25 September 1903 he re-engaged to complete 21 years with the colours. He accompanied his regiment on their first service in India on 27 January 1904 and on 1 April 1904 he was rated to Class I at 7d per diem. His wife gave birth to a son Charles James who was born at Lucknow on 2 January 1905 but sadly he died at Lucknow on 10 February 1906.

Sergeant Saddler Downey was invalided home to England on 6 February 1907 and on 26 March 1907 at Netley Hospital he was discharged from ‘A’ Squadron as medically unfit for further service. On his discharge he was described as aged 33 years 1 month 5 feet 11 inches in height with brown hair grey eyes and a medium complexion. His conduct and character was exemplary and he was described as a ‘good saddler –sober and most reliable.’ During his service of 13 years 71 days he was awarded the 2nd Class Certificate of Army Education and attended a course of saddler at Woolwich. Interestingly, he signed his name as C.A. Downey on his attestation documents but signed his name as C. Downie on his discharge certificate.

Sergeant Saddler Downey remained at Netley and died there a few days later on 1st April 1907, aged only 32 years. He was buried in the hospital cemetery.The Regimental Journal of the 1st (Royal) Dragoons The Eagle was only started in 1907 the first issue being published on 15 April and on page 37 it was reported:

We regret to report the following deaths:

With regards to the grave stone of Sergeant Downie – the Eagle on the top of his grave stone depicts a badge worn by the Royal Dragoons and taken from the French Imperial Eagle of the 105th Infantry of the Line, which was captured at Waterloo. The Eagle is still worn by the Blues and Royals as an arm badge. Also on the bottom of the stone are the tools depicting a freemason.

Thank you very much Jim. 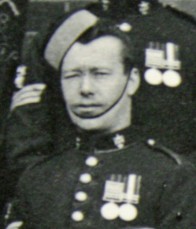 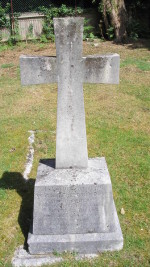 The Beloved Husband Of

Died whilst on leave from India. 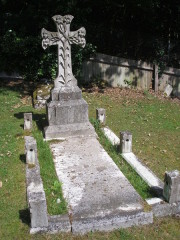 In Memory of Andrew Knox DRYSDALE

Died From Illness Contracted In India

Through Unremitting Devotion To The Duties Of His Post

Survived His Arrival In England Only A Few Days

This Monument Is Erected.

Another Having Been Erected At Worriston Cemetery Near Edinburgh

Andrew was a Surgeon in Her Majesty’s 79th Regiment of Highlanders. There is a question of wether or not he is buried here. Possible burial in Dean cemetery Scotland.

Burial record not
found as yet

In Loving Memory Of Alec

On His Immediate Return From Foreign Service. (Hong Kong) 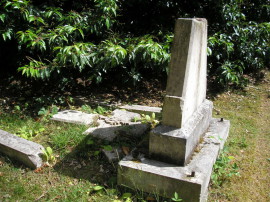 In Sacred Remembrance Of

Major Dyer married Elisabeth Anne Helsham on 15th April 1858 in Ireland. They had a daughter Sydenham Amy St Leger in 1861. 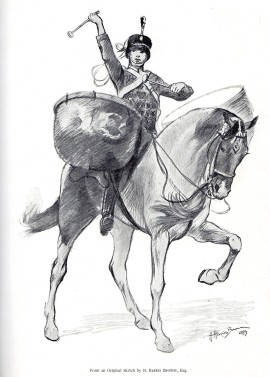