I have copied the names from the burial register so the spelling may be different to the original surname. Also, the names may have been misheard and written wrongly in the first place.

Burial record no 2021 Church of England

Buried in the cemetery is Alli Bapoo. He was born approx. 1872 and died in 1895. In the burial register, Alli is noted to be a Lascar Seaman which is a sailor from the East Indies. He was serving on the R.J.M. Troopship "Clive". Ancestry has a medal record for him.

He has no headstone. 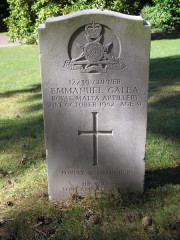 His Wife Sons and
Relatives

There is a burial record for A (Alexander) TOLMIE who was in the Malta R.G.A. He died on 8th July 1905 aged 28 years. He has no headstone. 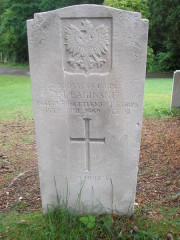 Burial record states he was 49 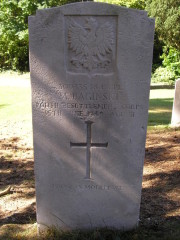 Constantine is listed in the Navy Lists on ancestry from 1896 onwards. 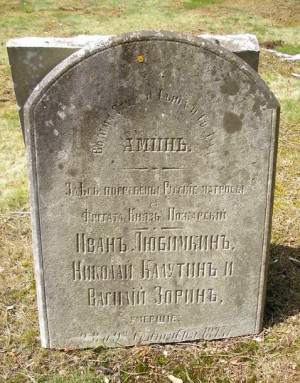 There are Burial records for 3 Russian soldiers who were buried around the same time:

All Church of England.

These sailors are buried together and have a headstone which had been puzzling many people for a long time because nobody could read Russian. My thanks to Max Khitrin for translating the words and giving the sailors their proper resting place in the cemetery.

It's even written in language that was used before revolution in 1917.
It says:
First arc line is words from the Bible, don't know how it's right translated into English. Something like "in the name of the Father and the Son, and the Holy Spirit"
The big word means "Amen"
Then it says that there buried Russian sailors from the frigate "Kniaz (like king or mostly like prince in English) Pozharsky". http://en.wikipedia.org/wiki/Russian_ironclad_Kniaz_Pozharsky
Then there there are their names: Иван Любимкин (Ivan Lubimkin), Николай Калутин (Nikolay Kalutin) and Василий Зорин (Vasili Zorin).
They died in 2,8 and 9 of September, 1873.

Update July 2013. Geoff Watts found a death certificate for Nikolai which stated that he died from enteric fever. Possibly the same fate for the other sailors too? 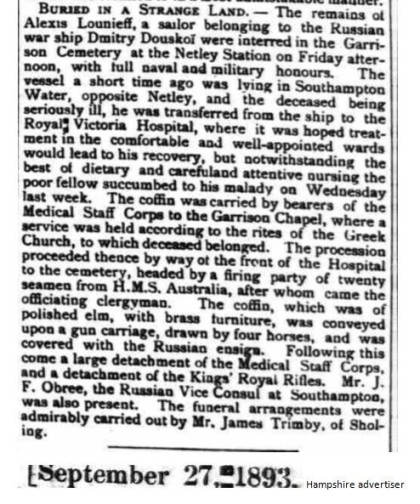 Another Russian sailor buried in the cemetery is Alexis LOUNIEFF. He has no headstone and the clipping is from the Hampshire Advertiser dated September 27th 1893.