On the 16th August 2018 I received this email from Charles Ravenhill. His wife Megan and son Daniel have been researching their family history and have sent me details that they have found out about Major Ravenhill. Thank you so much. He was a very important man who helped build Netley Hospital.

In April 1855, Captain Phillip Ravenhill returned to England after being invalided out of the Crimean War with permanent damage to his lungs 1.He was preparing trenches for troops at the battles of Alma, Inkerman and Sebastopol – working with distinction ‘during the heavy weather of that first winter’ 2.

After about 6 months at the War Office in London, Philip was assigned to the building works on the Royal Victoria Hospital at Netley Southampton, this was 5th December 1855. He was only 27 years old 3. Philip was a skilled draftsman as well as an engineer and had honed his skills during his time in Malta where he drew plans for some of their fortifications at Vittoriosa and St Angelo plus and a new school at Verdala, amongst other fortifications and repairs on the Island.

At Netley, Philip was firstly assigned to supervise the sinking of wells on the site to determine if there would be enough water to supply the hospital. He became the resident engineer for the War Departments and his rank is recorded as Major 4. Although water was found, it was too near the surface, so it was decided to build a reservoir at Hound Grove.

The war office intended this to be a quick project for him lasting two years, with him supervising the building of what was to become a major teaching military hospital. However, Florence Nightingale (the niece of his wife’s cousin), when she came back from the Crimean War, wanted to design the hospital, she was determined to ensure that the standards in hospitals were changed. When Florence found she was too late to design the building and that work had already started, she influenced a number of committee meetings which discussed and kept amending the plans 5. This was no small project either. The building was designed to accommodate 1000 patients and was half a mile long 6. This must have been a nightmare for Philip as the plans kept changing while the building was being built, although he was more than capable of redrawing the plans, this caused huge delays with the building talking seven years in the end.

“It will be remembered that this officer has been connected with the Netley Hospital from the time of the laying down of the foundation stone by Her Majesty in May, 1856, up to the present time; and the amount of mental labour and anxiety that must have fallen on the officer commanding the Royal Engineers during that period, can be more easily imagined than described”. The Army and Navy Gazette 1 April 1865.

In June 1855, when Philip was 27 years old, he approved the plans for the building’s foundations and drains, and allowed for the building work to commence. It was decided to invite Queen Victoria to lay the foundation stone. They worked out that logistically, it would be better for her to arrive by sea. Staying at Osborne House on the Isle of Wight, then travelling over to lay the foundation stone. What they needed was a safe landing spot near the building works for Queen Victoria to disembark. On 24th April 1855, Philip as the officer superintending the works, applied for permission from the Southampton Harbour Board to erect a temporary jetty of about 300 feet in length near to the building site 7 'for her Majesty to land for the purpose of laying the Foundation Stone of the new Hospital' . The application was granted.

The foundation stone was laid on the 19th May 1856, it turned out to be the Queen’s first public engagement after the end of the Crimean War. There were a couple of mishaps with the plans for the day. Although it was a fine and dry day it was very windy, the sea was too rough for the Queen to land at the jetty with its red carpet.

It must have been a grand site for Philip to watch, the Royal Yacht, the ‘Victoria and Albert’ was accompanied by a frigate and 12 gunboats from the Royal Navy. All the dignitaries from Southampton were there, important notable people plus Officers from the Armed Services. It was so windy they had to transfer Queen Victoria into the Royal Barge, beach it on the shingle beach and let her disembark there. To mark the occasion in true Royal style, there was a gun salute. Unfortunately, one gun fired prematurely and two sailors were killed outright whilst others were injured 8. Not the welcome Philip had envisaged for her. The ceremony went ahead regardless, under the foundation stone she laid a copper casket with the plans for the hospital, the first Victoria Cross, a silver Crimea medal with all four campaign bars and coins of the realm 9.

Whilst Philip was the Superintendent of works for the Royal Victoria Hospital the family lived in the Netley area. Netley village, stretched along the sea-front from Netley Abbey to the Royal Victoria Hospital site. There were officers’ quarters there 10. However when Philip's second child was due to be born, his wife Jane stayed with her mother, Harriet Jane (1800-1859) and her sister Augusta Mary Carter (1829-1919) in Cheltenham. Arthur Henry Dickson Ravenhill (1856-1915) was born there 12 February 1856 11. It is possible that Jane stayed with her mother because of the state of the build and environment in Netley, or because their oldest son was already showing signs of a disability that institutionalised him later in life 12. A further two children were born in Netley; George Wright Ravenhill (1858-1925) and Edgar Evelyn Ravenhill (18591907)13. None of Philips’ children appear to have been Christened or Baptised.

Throughout 1857, Florence Nightingale, had been campaigning for improvements to be made to Military Hospitals and the Barracks where soldiers lived. Her sense of urgency was fuelled by the number of soldiers, sailors and officers who were returning from the Crimean war injured or very sick. A Royal Commission into Army conditions 14 led to the setting up of The Commission for Improving Barracks and Hospitals in 1858.

Starting in Britain all Barracks and Hospitals were inspected and this rolled out across the British Empire. This Commission found on inspection, that 162 barracks in Britain were inadequate and unacceptable. With Major Philip Ravenhill’s  architectural training and his experience working on the Royal Victoria Hospital he was promoted to Deputy Director of Works to Barracks, a post he held for 17 years (1862-1879), from age 33 to age 50 (Porter 1889; Hart 1880) 15; not the two year post he had anticipated. They moved to live in Mansbridge Road (now the A27), South Stoneham, Hound in Hampshire 16  a little further inland but still close to Netley.

The following year in 1859, funding for improvements for the Army increased. In 1861, the Commission into Army conditions recommended improvements to heating and ventilation, kitchens, laundries, workshops, married quarters, plus improvements to day rooms, libraries and reading rooms for the men and improvements to the gymnasiums 17. This meant that changes to the Royal Victoria Hospital were now needed to improve living conditions for the live in staff as well as the patients.

Philips’ fifth child, daughter Maud, was born 15 January 1862 at their home in Hound, Hampshire. Sixteen months later, the hospital opened to the first patients and casualties 19 May 1863, Philip was now 35 years old. War Casualties were shipped in from war zones to Southampton Water and the 170 metre pier that was purpose built for ease of access for casualties 18. During this period there were a number of snagging problems identified from missing desks to blocked chimneys 19, it usually fell to Philip to resolve many of these problems for staff and patients.  “…an eminent professor connected with the Hospital thus writes of Major Ravenhill: - ‘It was really a pleasure to have a grievance to be put right by him, he did it so kindly and courteously’”. The Army and Navy Gazette - 1 April 1865

This was an intense family time for Philip, 4 months after the opening of the Royal Victoria Hospital, his sister died very suddenly on 17 September 1863, then his 68 year old mother died nearly 8 months after that, on 2 May 1864. Still records of him at that time show he was still courteous, kind and gallant.

By 1865, Philip’s work was done. On 28 March 1865 about 42 invited guests including eminent medical staff and fellow Royal Engineers sat down for a farewell meal celebrating Major Philip Ravenhill and all his achievements with the Royal Victoria Hospital. Inspector General Dr. Anderson had been invited to raise a toast to Major and Mrs Ravenhill 20.

“It is difficult to say which will be most missed at Netley, Major Ravenhill’s happy expression and official courtesy, Mrs Ravenhill’s kind and amiable disposition in the social circle, or the joyful countenances of their three boys and girls; but of one things we are certain, that they leave to the sincere regret of a large circle of friends, and with every good wish for the future happiness and welfare of them all”. The Army and Navy Gazette - 1 April 1865

Long after the hospital opened in 1863, Florence Nightingale continued to campaign for improvements and Philip being the deputy director of works for the war office, Florence used her family connections to add weight to her arguments and try to cajole the War Office into making the changes and improvements she perceived essential.

Florence Nightingale wrote a series of letters to various people she thought might listen, including her cousin Henry Bonham Carter 21 who was also related to Philip’s wife. Florence was worried about the location of and security of the nurses’ quarters. In her experience and non-commissioned officers male orderlies tend to get ‘the worse for drink’ at night time, which is not how female nurses want to spend their time and they need protecting from drunken male staff. She wrote:

I thought it better to obtain some information from Major (now Colonel) Ravenhill, who built the hospital, before sending you in my remarks on the plan.  Here they are:

I think, the proposed alterations, to the plan is a very ingenious and good one and gives no more than is absolutely essential for respectable women.  Of course an adaption must always be awkward. And one would not have made such a plan originally…

…I understand that the W.O. is anxious to have your report in as soon as possible, in order to make arrangements to enter on the work at once. So I will send this off at once. Excuse haste.22

That is where this story ends.  Philip went on to become Major General and Chief Engineer on Gibraltar.

1 The Royal Engineer Journal April 1 1891 - "Hard work and exposure in the trenches induced disease of the throat, which necessitated his being invalided home, and he reached England in April 1855"

7 On 24th April Major Ravenhill, R.E, the officer superintending the works, attended a meeting of the Southampton Harbour Board and applied for permission to erect a temporary jetty near Netley, about 300 feet in length, 'for her Majesty to land for the purpose of laying the Foundation Stone of the new Hospital'. The application was granted and a copy of the Port Notice is reproduced.

13 Their births were registered in South Stoneham in Hampshire which is about 6 miles away, but subsequent census records state that they were born in Netley Hampshire. Jane Elizabeth Carter, according to some records was born in Stoneham, Hampshire. 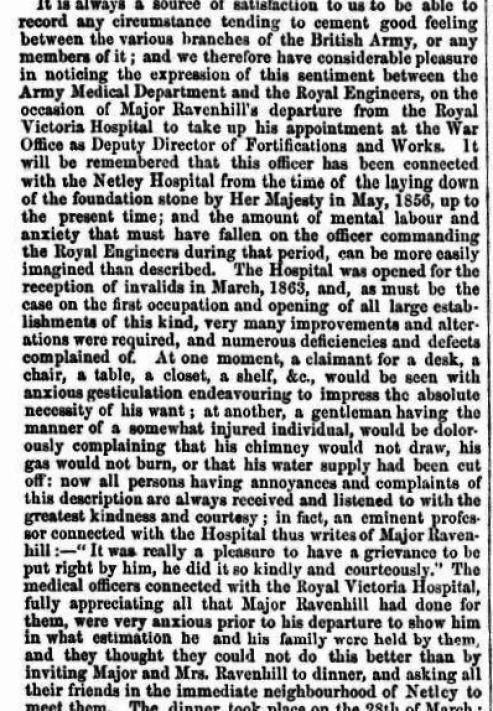 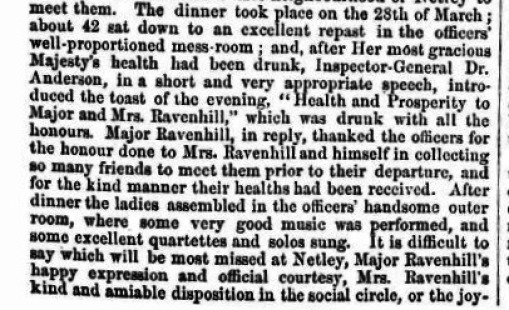 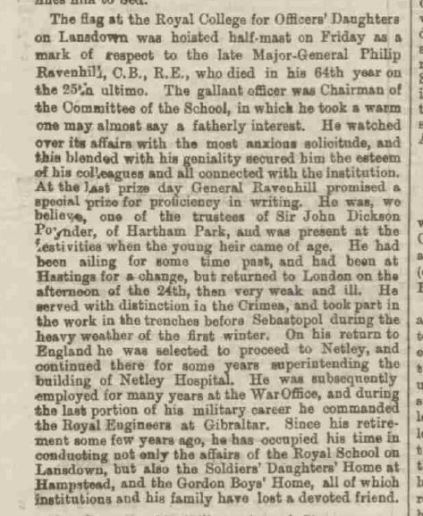