Macdonald, Sir John Denis (1826–1908), naval medical officer and biologist, born at Cork on 26 October 1826, was the youngest son of James Macdonald, an artist, and his wife, Catherine, daughter of Denis McCarthy of Kilcoleman, co. Cork. His father was the representative of the Castleton branch of the Macdonald family and claimant of the Annandale peerage through his great-grandfather, the Hon. John Johnston of Stapleton. Macdonald was privately educated, and after attending the Cork school of medicine went to King's College medical school in London to finish his course. Having qualified, he entered the navy as assistant surgeon in 1849 and was appointed to the Royal Naval Hospital, Plymouth. In 1852 he was appointed to the Herald and continued in her on surveying service in the south Pacific until 1859.

In 1859 Macdonald was elected FRS for his microscopic studies with the aid of the sounding lead, dredge, and towing-net, and was promoted to surgeon. In 1862 he was awarded the Makdougall–Brisbane medal by the Royal Society of Edinburgh for his deep-sea investigations. In 1864 he was appointed to Haslar Royal Naval Hospital, Hampshire, and in June 1870 as staff surgeon to the Lord Warden, flagship in the Mediterranean. He was awarded the Gilbert Blane medal in 1871. In March 1872 he was appointed to the flagship at Portsmouth for service as professor of naval hygiene at Netley, a post he continued to hold after his promotion to deputy inspector-general in February 1875. In July 1880 he was promoted inspector-general, and in that rank was in charge of the Royal Naval Hospital at Plymouth from 1883 to 1886. He retired on 24 May 1886 and was made KCB in 1902. His chief publications are The Analogy of Sound and Colour (1869), Outlines of Naval Hygiene (1881), and Guide to the Microscopical Examination of Drinking Water (1883).

Macdonald was twice married: first, in 1863 to Sarah Phoebe (d. 1875), daughter of Ely Walker of Stainland, Yorkshire, with whom he had two sons and two daughters; second, to Erina, daughter of William Archer, prebendary of Limerick; she died childless in 1893. Macdonald died at his home, 42 Granada Road, Southsea, Hampshire, on 7 February 1908. 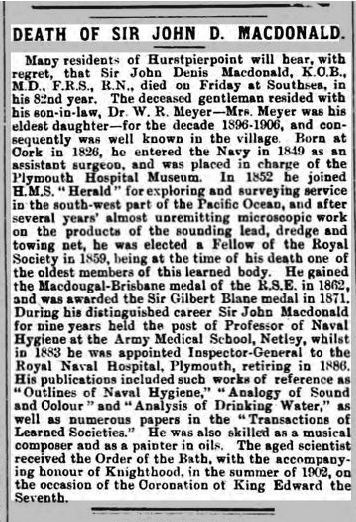