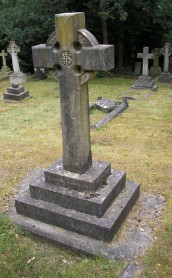 There is much to read about Timothy on the internet and his research into Cholera.﻿

Burial Record no. 779 Church Of England 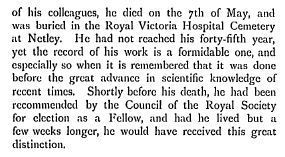 from Pioneers of Public Health 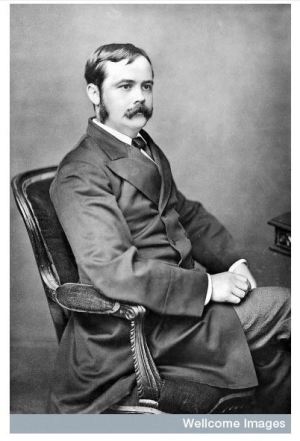 from the Wellcome library

Lewis, Timothy Richards (1841–1886), pathologist and parasitologist, was born on 31 October 1841 in Llanboidy, Carmarthenshire, the eldest of eight children of William Lewis and his wife, Britannia Richards. Both parents came from established farming families, and Lewis's early years were spent at Crinow Farm, Narberth. Lewis left the grammar school in Narberth at fifteen to become apprenticed to a Narberth druggist. Four years later he was in London, first with a Mr Porter, an ‘operative chemist’ of Streatham, and next at the German Hospital in Dalston as an apothecary. As well as acquiring skills in chemistry and the German language, Lewis attended lectures at University College, London, and was awarded the Fellowes medal in 1866. His formal medical qualification (MB, 1867) was, however, gained from the University of Aberdeen. In February 1868 Lewis came first in the London examination for entry to the Army Medical School in Netley, and did equally well in the course. He was commissioned assistant surgeon on 31 March 1868, surgeon on 1 March 1873, and surgeon-major on 31 March 1880.

Lewis's career was decisively influenced by his being chosen in 1868 to study the current theories of cholera causation, first in Germany and then in India. His colleague on this officially sponsored mission was Douglas Cunningham of the Indian Medical Service, with whom Lewis was to collaborate for most of his career. While in Munich, Lewis made the acquaintance of another lifelong colleague, the epidemiologist Max von Pettenkofer. Lewis and Cunningham reached Calcutta in January 1869, and Lewis worked in India, with one interval, until 1883. In 1879 Lewis spent several months visiting European laboratories. His pathological researches and field studies appeared regularly in the form of official reports presented by Dr J. M. Cuningham, then sanitary commissioner with the government of India, and were concerned with such subjects as cholera, leprosy, ‘oriental sore’, enteric fever, relapsing fever, and prison dietaries.

Lewis's pre-eminence as a microscopist led in 1869 to his discovery in human urine of one stage of the filaria parasite, later known as Wuchereria bancrofti. Pursuing this finding, Lewis published in 1872 the first observation of nematode haematozoa in human blood, and coined the term Filaria sanguinis hominis. In 1877 he observed the adult male and female forms. In 1870 he gave the first authentic account of amoebae in the human intestine.

Lewis returned to England in March 1883 as assistant professor of pathology at the Army Medical School in Netley, where he introduced practical instruction in modern methods of bacteriological enquiry. From 1884 to his death Lewis was involved in critically evaluating Robert Koch's bacteriological explanation of cholera.

On 8 October 1879 Lewis married Emily Brown, daughter of James Brown of Lewisham. Lewis died childless on 7 May 1886 at his home, Bywood, in Woolston, near Southampton, from pneumonia, possibly aggravated by septicaemia. He gained only minimal official recognition for his work; his early death at forty-four prevented his election to the Royal Society. His name is associated with the first description (published 1878) of a mammalian trypanosome (T. lewisi).