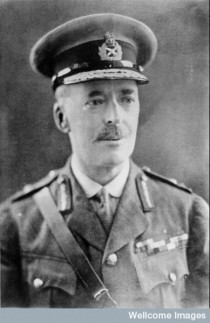 After graduation he joined the Army Medical Corps and served in India, returning to work at the Army Medical School at Netley. It was while he was an assistant Professor there in 1900 that he identified the causative parasite of Dum-dum fever (now known as leishmaniasis). After the war he became the first Director of Pathology at the War Office and later Medical Director of the army medical services.

Leishman, Sir William Boog (1865–1926), bacteriologist and pathologist, was born in Glasgow on 6 November 1865, the fourth of six children and youngest of the three sons of William Leishman (1833–1894), regius professor of midwifery in the University of Glasgow, and his wife, Augusta Selina, eldest daughter of George Drevar, of Rosehill, Blackrock, co. Dublin. The divine, Thomas Leishman, was his uncle. Leishman attended Westminster School and studied medicine at the University of Glasgow, where he graduated MB CM in 1886. He entered the Army Medical Service in 1887, passing fifth into the Army Medical School at Netley in Hampshire. After three years' home service he was posted to India, where he spent the next seven years (excluding a year's sick leave in 1892–3). He saw active duty during the Waziristan campaign of 1894–5 and was awarded the medal and clasp.

In 1899 Leishman was promoted to the rank of major in the Royal Army Medical Corps and posted back to Netley, in charge of the medical wards. He spent his spare time working in the laboratory of the professor of pathology, Almroth Wright, and of his assistant professor Major David Semple. He was rewarded for this initiative when he succeeded as assistant professor of pathology in 1900. This appointment gave Leishman his first real opportunities for original research, and he combined an existing interest in microscopy with the expansive view of pathology presented to him by Wright. He enjoyed three major achievements in the following three years, and this period established his reputation in the fields of military public health, and microbiology.

In 1900 Leishman identified the causative parasite of kala-azar or Dum-dum fever. However, this work was not published until 1903, when Lieutenant-Colonel Charles Donovan of the Indian Medical Service confirmed the discovery, and Ronald Ross coined the term Leishmaniasis to cover all conditions associated with this and closely allied parasites. In 1901 Leishman modified Romanovsky's stain, rendering the diagnosis of malaria much easier, especially in the tropics, where facilities were often limited. Wright's interest in infection and immunity and his development of practical techniques attracted Leishman's attention, and in 1902 Leishman developed a method for quantitatively estimating the phagocytic power of the blood. In the same year Leishman married Maud Elizabeth, eldest daughter of Lieutenant-Colonel Edward Gunter, of the East Lancashire regiment; they had four children: one son and three daughters.

In 1903 the Army Medical School was transferred from Netley to Millbank, London, and Leishman was appointed professor of pathology, a post he held until 1913. In this ten-year period he continued to work on kala-azar and developed the practical use of anti-typhoid vaccine under the auspices of the anti-typhoid committee. A large quantity of the vaccine was held at the Royal Army Medical College, and within two weeks of the outbreak of war in August 1914, 170,000 doses were issued to the troops. It has been estimated that without the use of this vaccine in the First World War there would have been about 551,000 cases of typhoid, with more than 77,000 deaths; in the event there were 21,139 cases and 1191 deaths. Before the outbreak of war Leishman had begun to investigate pathogenic spirochaetes, and with the cessation of hostilities found the time to conclude his work on the life cycle of the Spirochaeta duttoni, the cause of relapsing fever, which is conveyed by the tick Ornithodoros moubata. In 1920 he presented the results of this research in the Horace Dobell lecture before the Royal College of Physicians.

When Leishman's professorship terminated at the end of January 1914, he became the War Office's expert on tropical diseases on the army medical advisory board; he also continued his own research work in the laboratories at the Royal Army Medical College for a time. In October 1914 he joined the British expeditionary force as adviser in pathology, and organized the pathological laboratories in France and Flanders. He chaired War Office committees on ‘trench fever’ and ‘trench nephritis’, new conditions in military medicine, consequent on stationary warfare. In April 1918 he returned to England, to duty at the War Office, and he was gazetted major-general in October that year. In June 1919 he became the first director of pathology at the War Office. In July 1923, he was appointed medical director-general of the army medical services, with the rank of lieutenant-general. He showed good administrative skills and had already proved himself a very successful teacher and promoter of research.

Leishman was knighted in 1909, and created CB in 1915, KCB (military) in 1924, and KCMG in 1918. He was made honorary physician to King George V in 1912, and a commander (1915) and grand officer (1925) of the Légion d'honneur; he received the Distinguished Service Medal of the United States of America and was three times mentioned in dispatches. He was elected a fellow of the Royal Society in 1910 and served on its council and on many committees. He was elected a fellow of the Royal College of Physicians in 1914, and to his great delight in 1925 he was made a member of the Athenaeum, in recognition of his distinction in public service and science. He was an original member of the Medical Research Committee (later Council) from 1913 to 1923 and was re-elected in 1926. He was president of the Society of Tropical Medicine and Hygiene in 1911–12, and of the section of comparative medicine of the Royal Society of Medicine in 1926, and he chaired the foot-and-mouth research committee at the Ministry of Agriculture in 1924. Glasgow and McGill universities each conferred on him an honorary LLD degree. He gave the Harben lecture (1910) on anti-typhoid inoculation, and the Linacre lecture (1925) at St John's College, Cambridge, on health in the tropics.

Leishman was an accomplished landscape artist and musician. He was also a keen sportsman and sailed a small yacht during his years at Netley. Contemporaries described him as universally liked and respected both within and beyond the military service. He died in London after a short illness, on 2 June 1926, at Queen Alexandra's Military Hospital, Millbank, and was buried in Highgate cemetery three days later; his wife survived him. In recognition of his association with military medicine, memorial tablets were placed in the chapel of the hospital and in the pathological laboratory of the Royal Army Medical College, Millbank.