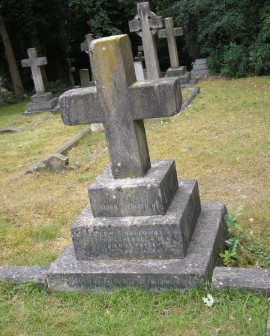 James was married to Mary and in the 1871 census they were living at Honvilla? House in Hamble with 2 servants.

Department, who died while acting as principal medical officer at

Netley on the 19th ultimo, was the son of the late Benjamin Holloway,

Department as an Assistant-Surgeon in the year 1848, and his dates

by the Army List to have been as follows :--Surgeon, October 2nd,

served both as Assistant-Surgeon and Surgeon in the 24th Regiment

of Infantry. On becoming Deputy Surgeon-General in 1876 he was

posted as principal medical officer of the Dublin division of the

army in Ireland, and from there, in 1879, be was transferred to

South Africa for duty. He received the appointment of principal

the disaster of Isandhula, and served in that capacity during the

Zulu war and the Sekukuni. For his services during this period he

was gazetted to a Companionship of the Bath. He returned to

England towards the close of the year 1S81, and in the spring of

the year 1882 was appointed principal medical officer at Netley.

his death. His funeral took place at the military cemetery, Netley,

on April 23rd, and was attended by the whole of the military and

medical officers and men doing duty at that station. The name of

his successor at Netley has not yet transpired.

The following station order has been published by Sir C. Pearson,

K.C.M.G., C.B., Governor and Commandant of the Royal Victoria

Hospital, Netley:-" The Commandant is grieved to announce the

officer of this establishment, which took place at 4 A.M. this morning (April 19th), after a very short but painful illness. In Dr.

Holloway Netley Hospital has lost a most capable administrator, and

his department a true friend, who most jealously guardled its honours,

its privileges, and its rights. To the medical officers of the army,

and of this hospital in particular, Sir Charles Pearson desires to express

his sincere regret at the loss their profession has so unexpectedly

incurred, and, in the name of all under his command, he begs

to offer his heartfelt sympathy with Mrs. Holloway in the affliction

which has overtaken her with such awful suddenness."

The British Medical Journal May 5th 1883