"Mrs. Deeble's Royal Red Cross was the tenth to be awarded following the inception of this award in 1883. Of the previous nine issues, eight had been bestowed on ladies of royal or similar connections and the other on Florence Nightingale. Therefore, Mrs. Deeble's R. R. C must be considered the second to be awarded to a lady for nursing services. Approximately 15 medals to nurses for the Zulu war.

Jane Cecilia Deeble, widow of Surgeon-Major William Deeble, who had met his death in the Abyssinian Campaign of 1867, entered the Military Establishment on 1 November 1869, having previously been a Probationer in Florence Nightingale's training school at St. Thomas' Hospital. On taking up this appointment, she became Superintendent of the Staff of Nursing Sisters at the Royal Victoria Hospital at Netley and in 1870 Lady Superintendent of the Army Nursing Service, a post she continued to occupy until 1889, a record span of office. Apart from gaining immense popularity as a 'homely' type of woman, Mrs. Deeble has been credited with saving the Army Nursing Service from early extinction, more so following the damage done by her rather bossy and aristocratic predecessor, Jane Shaw Stewart. Her initial appointment had sprung from an interview with Florence Nightingale in November 1869 but from the tone oft he latter's report to one Dr. Sutherland, it seems surprising her military nursing career ever got off the ground:

Despite the inglorious nature of her first interview, Mrs. Deeble was duly accepted. This change of definition or direction within the Service - namely a more humane and less stuffy approach to nursing - d id much to preserve the future of the profession, particularly within military circles. Nonetheless, Mrs. Deeble held strong views on the type of woman suitable for such employment. As late as 1887 she was busy observing that many nurses were not ladies but rather offspring from 'the shop girl class.' She was also anxious that her girls should prove themselves tough enough for military campaigning. To that end she fought rigorously for their employment in South Africa during the Zulu War and at length won approval to depart with a small team of six Netley nurses, albeit in the wake of seven women from the Stafford House Committee.

Her enthusiasm to prove that the 'Netleys' were made of sterner stuff became rapidly evident. On their first night in South Africa, Mrs. Deeble declined the use of canvas, insisting her team would sleep rough. It was unfortunate that a rather heavy rainstorm ensued, thus compelling them to retreat to the cover of the opposition's lodging! Far from being downhearted, the redoubtable Mrs. Deeble set about her duties admirably, and was duly commended for 'conspicuously good service. ' Highly praised for her 'administrative capacity, ' her activities were specially acknowledged by command of Queen Victoria.

Some while later Her Majesty had the opportunity to personally decorate her at Windsor Castle. Mrs. Deeble finally retired in 1890. Much of the above detail has been taken from Anne Summers' 1988 publication, 'Angels and Citizens, British Women as Military Nurses, 1854-1914".

Steven Lawson Deeble sadly died in 1890 at the age of 28. Burial place unknown as yet. 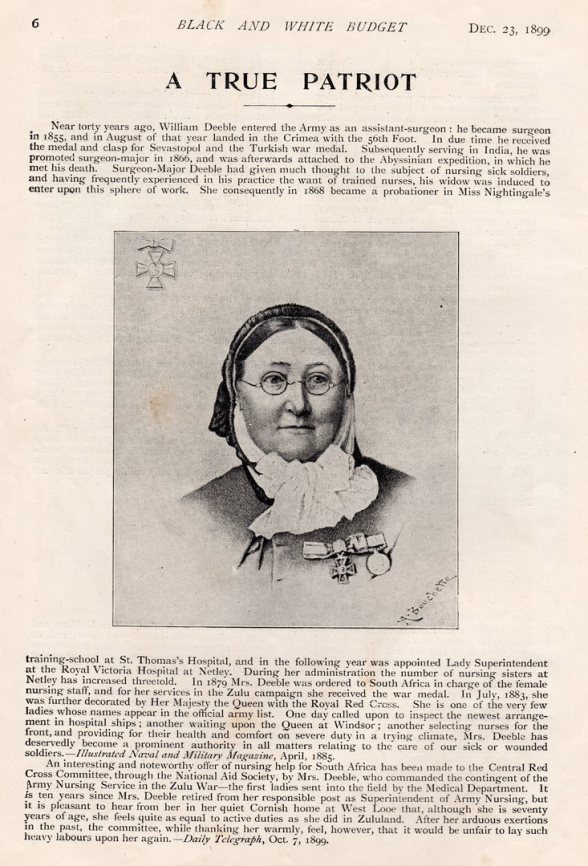 Here is the link to the Ryde Social Heritage Group which has a page for Jane and her son William's unmarked grave on the Isle of Wight.