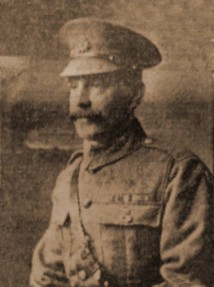 'The Fighting Librarian of Netley'

This was Robert Francis Davis, Robert originally came from the old parish of Clerkenwell in London, at the age of 18 he joined the Royal Army Service Corp on the 24th of July 1894.

Robert was to serve all over the world and survived both Boer Wars in Africa and then the Great War.

In 1920 Robert retired from the Army with the rank of first-class staff sergeant major where he decided to settle at Netley.

Peace time saw Robert become the Librarian at the old Royal Victoria Hospital in Netley where he met many old soldiers and was also to become involved in the Ex-Servicemen's Club which had become one of Roberts main interests where he served as their treasurer, Robert was also a member of the Netley Royal British Legion.

Robert who lived in Victoria Road was not to see the second World War as sadly he died in 1934 aged 58, Robert left a wife and daughter.

This Netley man was honoured at his funeral which took place at Hound Churchyard with the Union Jack draped over his coffin.