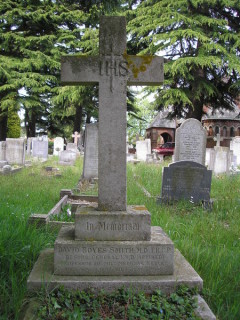 David Boyes Smith studied medicine at Edinburgh University, where he was elected a president of the Royal Medical Society. Qualifying in 1855, he immediately enlisted in the Bengal Medical Service. In his first three years in India, he served with the Bengal Foot and Horse Artillery and the 3rd Bengal Fusiliers. For his work in the cholera epidemic of 1856 he was publicly thanked by General Anson. During the Mutiny he saw action in no less than a dozen engagements, including the outbreak at Meerut and the siege and capture of Delhi, Lucknow and Bareilly, and received high commendation from his superior officers. His period of military service over, he was posted in succession as civil surgeon to six stations in Bengal, including Patna, where, in 1874, he was appointed first principal of the new Temple Medical School. For two years he performed the duties, in addition, of superintendent-general of vaccination, and for three those of sanitary commissioner for Bengal; and he edited a number of reports on vaccination and sanitation. He was also, from 1866 to 1867, the first editor of the Indian Medical Gazette. Smith’s last appointment in Bengal, in 1876, was as principal and professor of medicine of the Calcutta Medical College and ex-officio first physician to the College Hospital, and he was elected president of the Calcutta Medical Society. He retired in 1882 in order to fill the chair of military medicine in the Army Medical School, Netley, three years later. A handsome man of engaging modesty, brave on the field of battle, Smith was an authority on both military medicine and sanitation, and perhaps deserved more public recognition than he received. He died at Woolstone, Southampton.