When I was 21 my grandmother gave me an Edwardian diamond solitaire engagement ring and told me a story. It seemed that this ring had once belonged to a family friend, someone I knew as auntie Rosie.

Rosie was born in December 1898 and worked in the family shop after leaving school. In late 1917 she started to volunteer as a Red Cross VAD. For the rest of the war, she spent every Sunday, her only day off, working as a stretcher attendant at Netley Military Hospital. In 1922 she married Arthur. They were very hard up, work being hard to find, and she never had an engagement ring. Many years later, Arthur saw this ring in a pawn shop and bought it for her birthday. So, why have I got it? Well, that’s a roundabout story.

In 1942, my great-aunt Helen was a student teacher and took lodgings in Southampton with a nice couple called Rosie and Arthur. They quickly became firm friends, a friendship which extended over the next three decades encompassing Helen’s sister - my grandmother - and the rest of us.

When Rosie fell ill and died in 1972, Arthur came over to my grandmother and gave her Rosie’s diamond ring as a keepsake. My grandmother was aghast and pointed out that she had huge fingers, it would not fit her, and besides it should go to their granddaughter. Arthur said his granddaughter wasn’t bothered about such things. He said if Gran did not want it then perhaps she could keep it for me as I looked like I would have small hands. My grandmother kept the ring secret for nearly 10 years and gave it to me when I was 21. I still have it and I am very proud to know that it once adorned the finger of a VAD nurse. 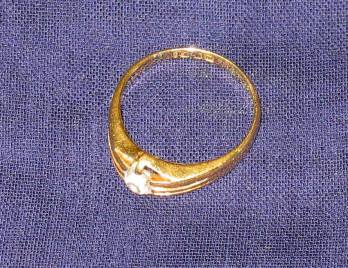 Thank you Karen for letting me share your story.