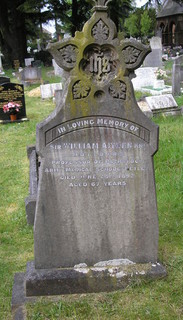 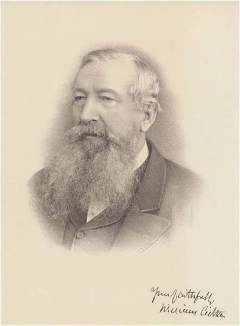 Aitken, Sir William (1825–1892), pathologist, eldest son of William Aitken, a medical practitioner, was born in Dundee on 23 April 1825. He was educated at the high school in Dundee, and was subsequently apprenticed to his father and at the same time undertook further training at the Dundee Royal Infirmary. In 1842 he matriculated at the University of Edinburgh, and in 1848 he graduated MD, obtaining a gold medal for his thesis, ‘On inflammatory effusions into the substance of the lungs as modified by contagious fevers’ (Edinburgh Medical and Surgical Journal, 1849). In October of the same year Aitken was appointed demonstrator of anatomy at the University of Glasgow under Allen Thomson, and also pathologist to the royal infirmary. He held both posts until 1855, when he was sent to the Crimea under Robert S. D. Lyons, as assistant pathologist to the commission appointed to investigate the diseases from which the British troops were suffering. In 1860 Aitken was made professor of pathology in the newly constituted army medical school at Fort Pitt, Chatham, Kent, which was later moved to Netley, Hampshire. He held this appointment until April 1892, when failing health forced him to retire.

Aitken was elected FRS in 1873, and in 1884 he married Emily Clara, daughter of Henry Allen. He was knighted at the jubilee of 1887, and the following year he received the honorary degrees of LLD from the universities of Edinburgh and Glasgow. During his professional career, Aitken wrote a number of books which were well received and ran to several editions after their initial publication. These included the Handbook of the Science and Practice of Medicine (1857), which had seven editions by 1880; An Essay on the Growth of the Recruit and Young Soldier (1862); and an unfinished ‘Catalogue of the pathological museum at Netley Hospital’.

Aitken died at his home, Grove Cottage, Woolston, Hampshire, on 25 June 1892. He was survived by his wife.