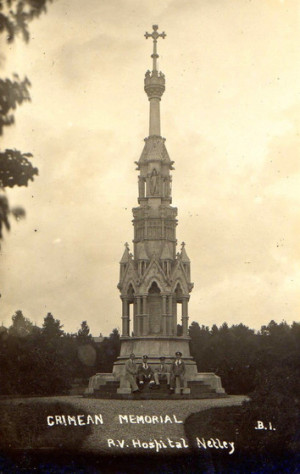 The 60 foot monument was built in 1864 to the memory of the medical officers of the British Army who fell in the Crimea War. It was situated near to where the cricket pavilion is today. It was demolished in 1973 due to it being in a dangerous state.

The Crimean War Memorial on the right from Audrey Cleverley 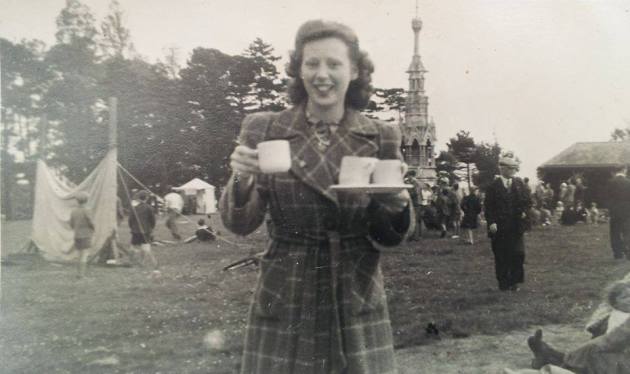 Any one for a brew??

This lovely lady is Dot Spencer nee Perrin. She was an Auntie of Steve Cann who very kindly allowed me to use this photo. The Crimean War Memorial can be seen in the background.

Some information from Pete Starling about the Crimea Memorial. 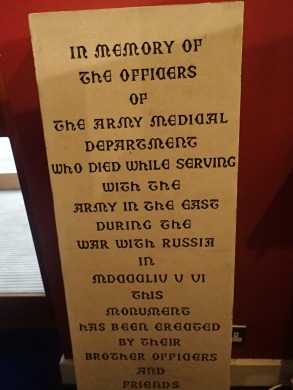 THE CRIMEAN MONUMENT AT NETLEY

Visitors to the RAMC museum at Aldershot may have spotted an engraved marble slab hidden away by the main door of the former RAMC Chapel, now the First World War exhibition area. What is it and where did it come from? Well, read on.

The fact that more deaths during the Crimean War were attributed to disease than enemy action is well documented in many of the published works on the Crimean war. Equally well documented is the fact that military commanders and the public initially tried to unfairly lay the blame entirely at the feet of the Army Medical Department. The department worked diligently to reduce the sickness that ravaged the army in the East and many of its members paid the ultimate price.

On 1 August 1864, his Royal Highness the Prince of Wales laid at Netley the foundation stone of a monument to the memory of the officers of the Army Medical Department who died while serving with the army of the East, during the Crimean War. The monument which was designed by, and erected under the superintendents of T Hayter Lewis, Esq Professor of Architecture in University College, is about 60 feet high and as the general character of a monumental cross of the early part of the 13th century. The main portion of it is built of Portland stone but the columns and small shafts of Derbyshire marble. The inscriptions and much of the ornamental work are incised in slabs of fine stone, and filled in with hard black cement.

The monument stands on a solid octagonal pedestal, above which is a canopied arcade of eight arches, under the protections of which are the inscriptions. Above this arcade the monument rises up by two stages to an ornamental cross at the summit.

The upper of the two stages has four canopied arches, containing allegorical figures of England, Scotland, Wales and Ireland.

The whole of the works was executed by Messrs. Myers and Sons.

The names of the officers to whose memory the monument has been erected, are recorded on seven of the panels and on the eighth is the following description:

‘In memory of those officers of the army medical Department who died while serving with the army in the East, during the war with Russia, in 1854, 1855, and 1856. This monument has been erected by their brother officers and friends’.

The ground for the site was kindly granted by Lord de Grey, the Secretary of State for War, and prepared for the foundations under the superintendent of Major Ravenhill R.E. The monument is now being completed and total expenses incurred have amounted to £8921.

The following are the names inscribed on the monument-

Not included on the monument are those members of the department who were invalided home and subsequently died.

Demolition of the Monument

The monument did not stand up to the ravages of time and being situated close to the banks of Southampton Water the salt water no doubt hastened its decay.

At a works meeting held at the Royal Victoria Hospital on Tuesday 7th June 1966 the dangerous state of the memorial was raised by the commanding officer of the hospital, Col Murphy who asked for financial cover for the renovation of the Memorial. At the same meeting it was agreed to put a temporary fence around the monument.[2] Enquiries were made to ascertain if the monument was classed as an ancient monument but it subsequently transpired it was not.[3]

Major FJ Pitt of the hospital staff wrote to Headquarters Hants sub district on 14 July 1966 officially requesting that finances for the restoration be investigated. Now things lay dormant until August 1968 when the then commanding officer, Col R G Davies wrote to the area office of the Ministry of Public Buildings and Works (MPBW) resurrecting the matter again and informing the addressee that the memorial was in an extremely dangerous state and surrounding fence useless and asking that priority be given to the restoration of the monument.[4]

On 29 October 1968 MPBW estimated the cost of repair between £3000 and £5000. In the same letter it was suggested that consideration should also be given to demolishing the memorial and preserving the name panels for placement in the chapel at Netley. This would cost an estimated £1000.[5]

On 10 February 1969 Headquarters Southern District wrote asking for the matter of the memorial to be looked at including the possibility of moving the complete memorial to Aldershot and also having it taken on the books of MPBW for maintenance in the future.[6]

In May of that year the Council of Colonels Commandant Royal Army Medical Corps (RAMC) took an interest and suggested that both the Crimean Memorial and the South African Memorial should be moved into Keogh Barracks at Mytchett. Headquarters Southern Command was instructed by the Director of Quartering (Army) in a letter dated 11 June 1969 to consider the ways and means of achieving the transfer of both memorials.[7] Headquarters South East District replied on the 2nd July 1969 that both memorials were not on MPBW charge and as such were owned by the RAMC and as such the RAMC should finance their removal or repair. The cost of moving the Crimean memorial was estimated at £25,000.[8]

Lieutenant Colonel I C S Munro then wrote to Headquarters Southern Command on 15 December 1969 again reminding them that the matter of responsibility for repairs had still not been resolved and that if the decision was delayed much longer the matter would be academic as the memorial would collapse. [9]

Over ensuing years correspondence went back and forth between the Ministry of Defence, Netley and various headquarters, with very little progress, until on 19 May 1972 MOD wrote to various addresses stating that the City of Portsmouth did not want to acquire the memorial and that it should be demolished.[10]

The Director General of the Army Medical Services (DGAMS) agreed with this proposal on 17 May 1972.[11] It would be several months before the monument was demolished, on 30 January 1973 and the dedication panel was the only piece retained. The demolition was recorded in the Southern Evening Echo of 30 January 1973.

It was expected to find a glass bottle under the base containing documents inserted in it during the dedication in 1864 but all that was found in the bottle was mud but a metal identity disc was also found.

So the splendid monument that once stood in remembrance of those brave medical personnel who died during the Crimean campaign over 100 years before finally disappeared and the sole remaining panel was transported to Keogh Barracks where it was installed in the headquarters building.

When the Defence Medical Services Training Centre vacated Keogh Barracks in 2014 I had the panel removed from the headquarters building and moved to the museum.

Note: Documents referred to in footnotes 2 to11 can be found in RAMC/801/7/5 held in the archives of the Museum of Military Medicine.

[2]Minutes of the Works Services Meeting held at the Royal Victoria Hospital Netley on Tuesday 7 June 1966.

The Officer's Mess was completed in 1867 and was built to accomodate the Officers who were visiting or worked in the hospital. It was converted into appartments in 1994 after being saved from demolition. It is now called Nightingale House, Nightingale Mews and Nightingale Walk and is a grade II listed building. 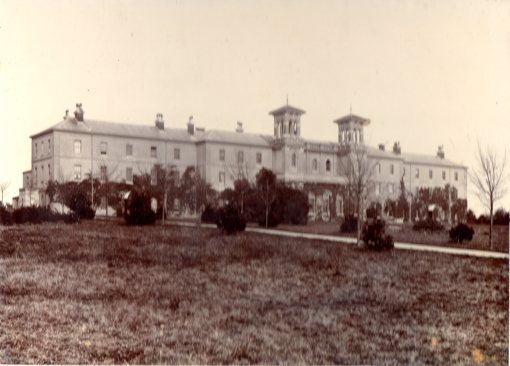 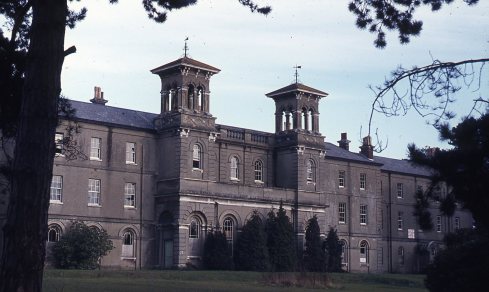 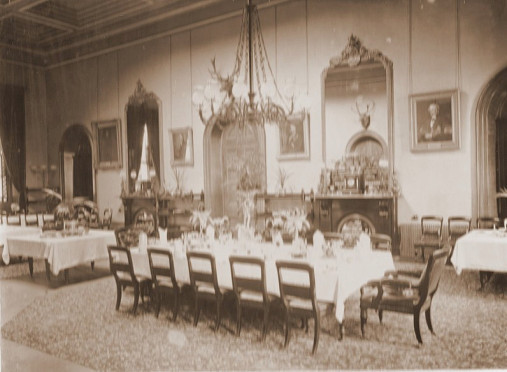 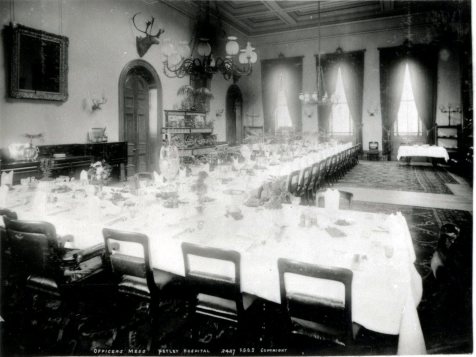 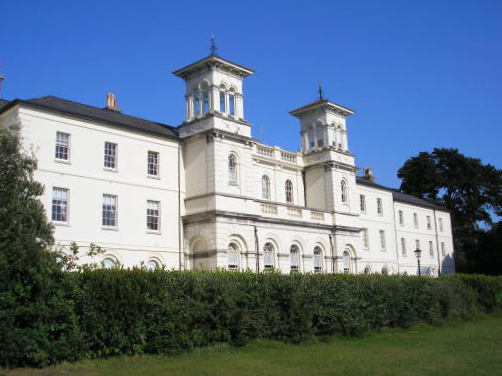 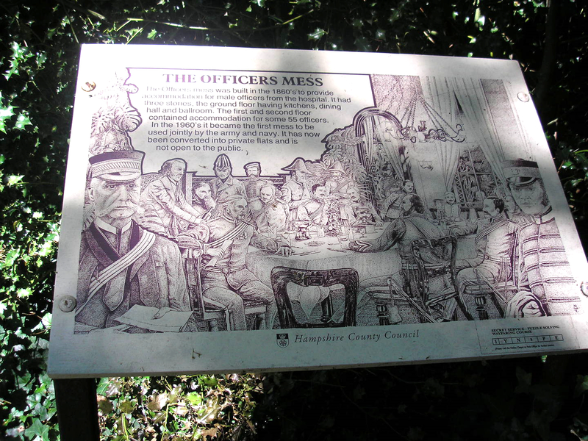 This plaque used to be by the Officer's Mess