There were many plaques in the Chapel put there over the years to commemorate the lives of individuals that had passed through Netley hospital, sadly none remain. I am trying to locate where they are now but in the meantime, here are some newspaper articles concerning them. 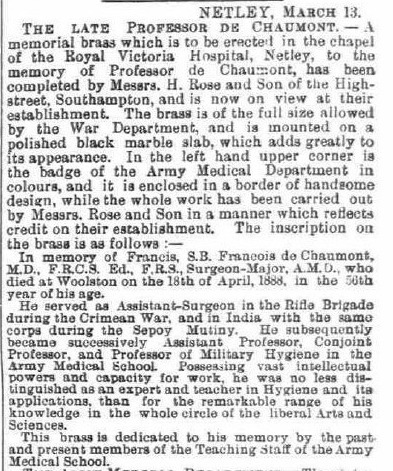 Peter Shepherd was born in 1841 in Leochel Cushnie, Aberdeenshire. In 1851 he was living at his father’s 50 acre farm Craigmill, with his parents, Peter (aged 50), Mary (aged 38), younger brother James, sister Mary Ann, his 19 year old cousin Peter, as well as 16 year old farm labourer John Edwards. He is listed in the census as a “scholar”. At 19 he was lodging in 37 Bonaccord Street, Old Machar, Aberdeen and studying medicine at the University.

He joined the medical service of the Army on 30 September 1864 and was promoted to Surgeon Major on 30 September 1876. In 1878 Surgeon-Major Shepherd of the Royal Herbert Military Hospital, Woolwich, London, together with Colonel Francis Duncan established the concept of teaching first aid skills to civilians. Shepherd conducted the first class in the hall of the Presbyterian school in Woolwich using a comprehensive first aid curriculum that he had developed. It was Shepherd who first used the English term "first aid for the injured"Dr James Cantile later published Shepherd’s lesson notes from that course as “First Aid To The Injured”. It wasn’t long before the newly-formed St. John's Ambulance was running other public courses in cities throughout Britain.

In 1879 he was with the troops that crossed Tugela River into the Zulu kingdom. Outmanoeuvred by King Cetshwayo the troops were ambushed and heavily defeated at Isandlwana. Surgeon Major Peter Shepherd attempted to move a wagon of injured troops back to Rorke’s Drift. The ambulance never made it out of this area and was overrun. The wagon could be seen for month. The injured soldiers were hauled out and killed.

There is no grave marker for Peter Shepherd at Isandlwana. But if he was buried where he fell it would be feasible to narrow the area down to a twenty yard radius of where George MacLeroy of the Natal Carbineers died, as his death site is marked. It was George that Shepherd was attending to shortly before his own death, an eyewitness Andrew Muirhead stated that Shepherd was killed by a thrown assegai soon after. Surgeon Major Shepherd's pony was recognised later by Surgeon Major Reynolds VC as it was ridden back to the camp at Rorke's Drift by a native soldier

A memorial brass was placed on the wall of the Royal Victoria Hospital Chapel at Netley, "In memory of Peter Shepherd, M.B., University of Aberdeen, Surgeon-Major Her Majesty's Army; born at Leochel Cushnie, Aberdeenshire, 25th August I841; who sacrificed his own life at the battle of Isandhlwane, Zululand, 22nd January I879, in the endeavour to save the life of a wounded comrade. Erected by his brother officers and friends" The committee that arranged the Shepherd Memorial for the Netley Chapel also placed a marble tablet to his memory in the graveyard of Leochel Cushnie Church and founded a "Shepherd Gold Medal" to be competed for annually as a surgical prize in the University of Aberdeen. 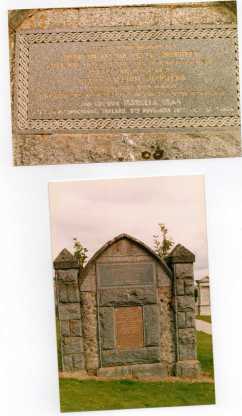 Thanks to Bob Michie. 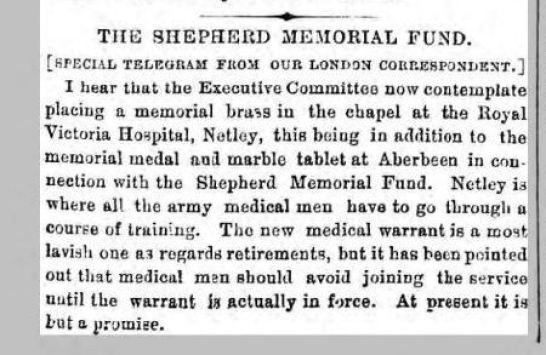 These plaques can be found in the R.A.M.C. museum at Aldershot. Many of them were thought to have been in the Chapel before the demolition of the hospital. 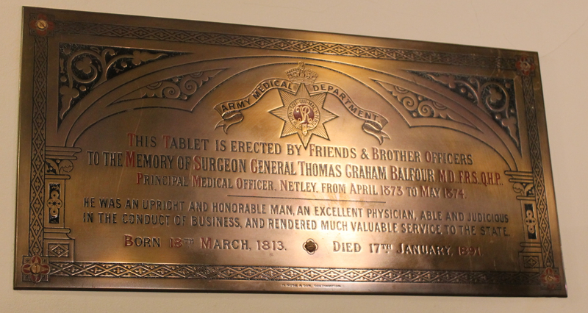 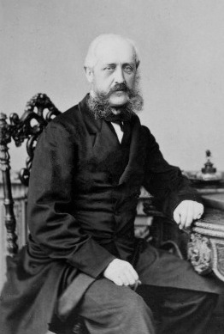 Balfour was born in Edinburgh on 18 March 1813. He was son of John Balfour, a merchant of Leith, and his wife Helen, daughter of Thomas Buchanan of Ardoch. He was great-grandson of James Balfour, professor of moral philosophy at Edinburgh in 1754, and of Robert Whytt, a celebrated medical writer and professor of physiology at Edinburgh. He graduated MD at Edinburgh in 1834; FRS, 1859; Surgeon-General, Honorary Physician to Queen Victoria and compiler of the first four volumes of Statistics of the British Army.

The Statistics of the British Army were reputed to be the most accurate and complete of their sort throughout Europe.

From 1840 to 1848, he served as assistant surgeon in the Grenadier Guards. In 1857 he was appointed secretary to Sidney Herbert's committee on the sanitary state of the army, and in 1859 he became deputy inspector-general in charge of the new statistical branch of the army medical department, a post which he held for fourteen years. He was elected a Fellow of the Royal Society on 3 June 1858, and in 1860 a fellow of the Royal College of Physicians of London.

He along with Dr John Sutherland were secretaries to the Sanitary Section of the International Statistical Congress in 1860, which was attended by Adolphe Quetelet, and to which Florence Nightingale submitted a paper

In 1887 he was appointed honorary physician to the queen. He was placed on half-pay as surgeon-general in 1876, and in his forty years of service had done much to improve the sanitary condition of the forces. He was President of the Royal Statistical Society from 1888 to 1890 shortly after it had changed from the Statistical Society of London. He married in 1856 Georgina, daughter of George Prentice of Armagh, and had one son, Sir Graham Balfour. He died at Coombe Lodge, Wimbledon, on 17 January 1891. 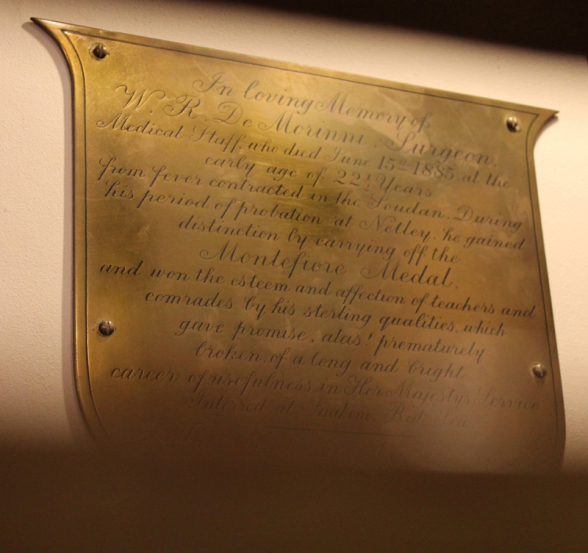 IT is with sincere regret that we record the death of

Surgeon-Colonel C. H. Y. Godwin, whose decease will be widely deplored throughout the Army Medical Staff, where his eminent scientific attainments were highly appreciated.

The news reached this country by telegram on Saturday last, he having died on the previous day, the 23rd inst., at Rawal

Pindi, where he was principal medical officer of the division.

He had only been in India three months when he was attacked with acute dysentery, which proved fatal in less than a fortnight. The circumstances under which he went to India will be fresh in the minds of our readers. On the resignation by Sir Thomas Longmore of the chair of military surgery at the Army Medical School, Netley, BrigadeSurgeon-Lieutenant-Colonel Godwin, who had acted in the capacity of assistant professor, succeeded Sir Thomas Longmore as professor. He had not long occupied that position when he was promoted to the rank of surgeon-colonel, but in consequence of some difficulty with the Treasury authorities regarding his pay, he was obliged to resign his chair of surgery. Thereupon he was ordered to India, and he had not been two months in that country when he was attacked, as we have said, with acute dysentery, which proved fatal in less than a fortnight. 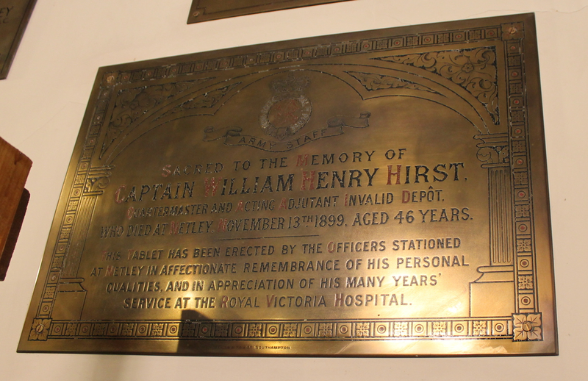 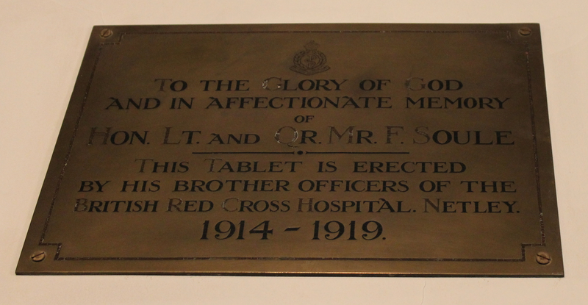 Francis is buried in Hound Cemetery. 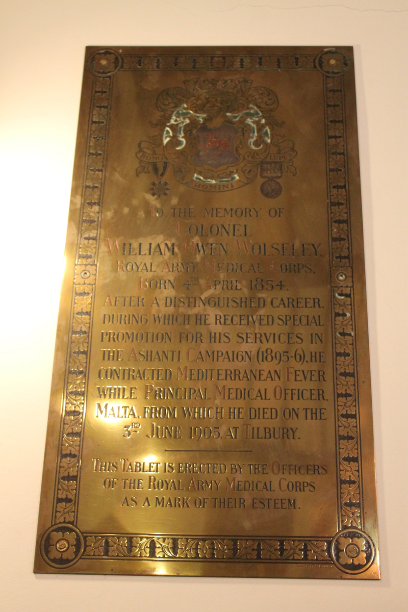